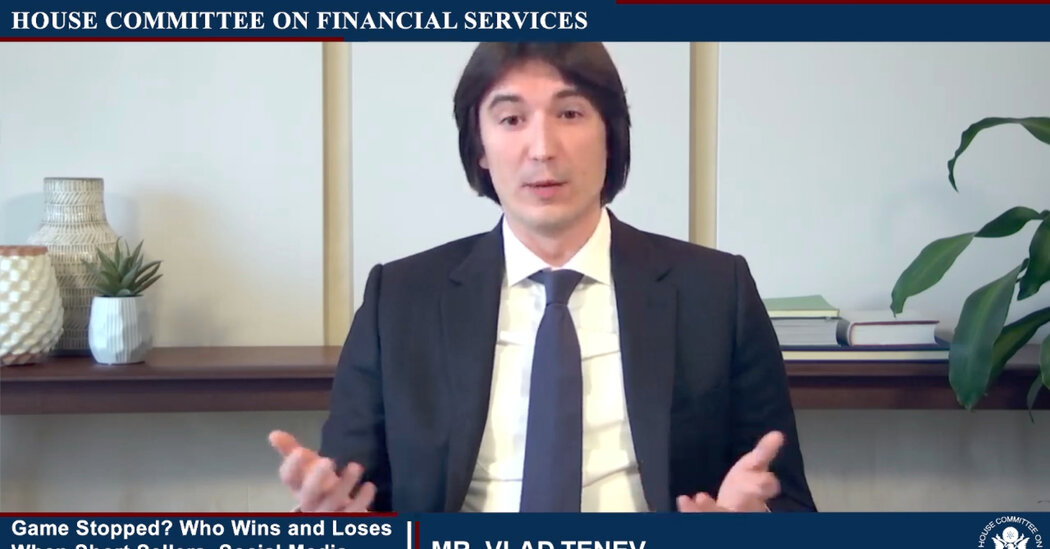 Most of the panelists were major players during a two-week period last month, when millions of small investors egged on one another via Reddit and other online forums to buy GameStop, driving the stock to stratospheric levels. Those small investors were at least partly motivated by a desire to hurt big Wall Street firms, like Mr. Plotkin’s Melvin Capital, which had bet that GameStop’s shares would fall as online gaming and streaming became more prevalent.

The small investors’ brokerage of choice was Robinhood, which has become wildly popular as a result of its combination of commission-free trading and gamelike features. As the volatility increased, Robinhood and other retail brokerage firms were forced to curb stock buying to meet deposit requirements with clearinghouses. But many of Robinhood’s customers believed that it was favoring its Wall Street partners.

Robinhood gets paid by Citadel Securities and other firms for directing customer orders to them, which is standard practice among retail brokerages. Citadel in turn makes money by using its high-speed trading engines to exploit tiny differences between prices to buy and sell. These are often mere fractions of pennies, but it quickly adds up with the vast number of trades Citadel executes.

Eventually the GameStop rally ended. During the last week of January, the company’s share price surged from $65 — where it ended the previous week’s trading — to an intraday peak of $483 on Jan. 28. That rise created roughly $30 billion in wealth on paper. While people who sold at the peak most likely made windfall profits, those who bought at the peak suffered deep losses as GameStop’s share price collapsed. The shares are down more than 90 percent from the Jan. 28 peak.

But in a saga as remarkable for its human characters as it was for the absence of clear heroes and villains, the target for both Republican and Democratic lawmakers was Robinhood.

“I love your company because it does, when correctly managed, provide investment opportunities for individuals who are currently frozen out of the markets for one reason or another,” said Representative Anthony Gonzalez, Republican of Ohio. He added: “At the same time, though, I believe a vulnerability was clearly exposed in your business model.”

Founded in 2012, Robinhood is very much a creature of Silicon Valley, embracing an ethos that has often put rapid growth above everything else. The problem with that approach, whether it’s Facebook or Uber, is that companies can often fail to foresee the problems that come with such a breakneck pace.