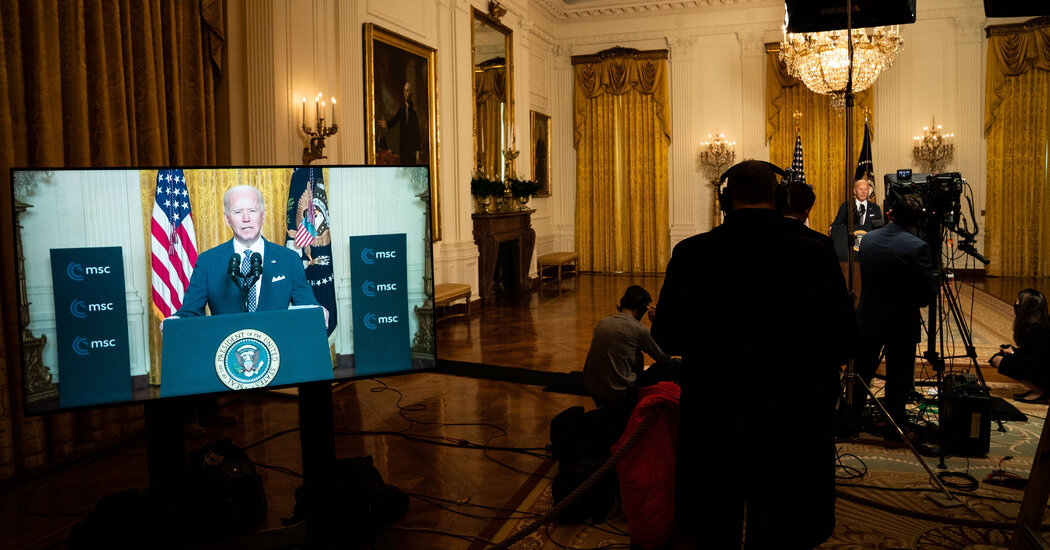 President Biden used his first public encounter with America’s European allies to describe a new struggle between the West and the forces of autocracy, declaring that “America is back” while acknowledging that the past four years had taken a toll on its power and influence.

His message stressing the importance of reinvigorating alliances and recommitting to defending Europe was predictably well received at a session of the Munich Security Conference that Mr. Biden addressed from the White House.

But there was also pushback, notably from the French president, Emmanuel Macron, who in his address made an impassioned defense of his concept of “strategic autonomy” from the United States, making the case that Europe can no longer be overly dependent on the United States as it focuses more of its attention on Asia, especially China.

And even Chancellor Angela Merkel of Germany, who is leaving office within the year, tempered her praise for Mr. Biden’s decision to cancel plans for a withdrawal of 12,000 American troops from the country with a warning that “our interests will not always converge.” It appeared to be a reference to Germany’s ambivalence about confronting China — a major market for its automobiles and other high-end German products — and to the continuing battle with the United States over the construction of the Nord Stream 2 gas pipeline to Russia.

But all three leaders seemed to recognize that their first virtual encounter was a moment to celebrate the end of the era of “America First,” and for Mr. Macron and Ms. Merkel to welcome back Mr. Biden, a politician whom they knew well from his years as a senator and vice president.

And Mr. Biden used the moment to warn about the need for a common strategy in pushing back at an Internet-fueled narrative, promoted by both Presidents Vladimir V. Putin of Russia and Xi Jinping of China, that the chaos surrounding the American election was another sign of democratic weakness and decline.

“We must demonstrate that democracies can still deliver for our people in this changed world,” Mr. Biden said, adding, “We have to prove that our model isn’t a relic of history.”

For the president, a regular visitor to the conference even as a private citizen after serving as vice president, the address was something of a homecoming. The session was crunched down to a video meeting by Prime Minister Boris Johnson of Britain, this year’s host, and the European leaders decided to do the same for a brief, closed meeting of the Group of 7 allies that Mr. Biden also participated in.

The next in-person summit meeting is still planned for Britain this summer, pandemic permitting.

Mr. Biden never named his predecessor, Donald J. Trump, in his remarks, but framed them around wiping out the traces of Trumpism in the United States’ approach to the world. He celebrated its return to the Paris climate agreement, which took effect just before the meeting, and a new initiative, announced Thursday night, to join Britain, France and Germany in engaging Iran diplomatically in an effort to restore the 2015 nuclear agreement that Mr. Trump exited.

But rather than detail an agenda, Mr. Biden tried to recall the first principles that led to the Atlantic alliance and the creation of NATO in 1949, near the beginning of the Cold War.

“Democracy doesn’t happen by accident,” the president said. “We have to defend it. Strengthen it. Renew it.”

“We will keep the faith” with the obligation, he said, adding that “an attack on one is an attack on all.”

But he also pressed Europe to think about challenges in a new way — different from the Cold War, even if the two biggest geostrategic adversaries seem familiar.

“We must prepare together for long-term strategic competition with China,” he said, naming “cyberspace, artificial intelligence and biotechnology” as the new territory for competition. And he argued for pushing back against Russia — he called Mr. Putin by his last name, with no title attached — mentioning in particular the need to respond to the SolarWinds attack that was aimed at federal and corporate computer networks.

“Addressing Russian recklessness and hacking into computer networks in the United States and across Europe and the world has become critical to protect collective security,” Mr. Biden said.

The president avoided delving in to the difficult question of how to make Russia pay a price without escalating the confrontation. A senior White House cyberofficial told reporters this week that the scope and depth of the Russian intrusion was still under study, and officials are clearly struggling to come up with options to fulfill Mr. Biden’s commitment to make Mr. Putin pay a price for the attack.

But it was the dynamic with Mr. Macron, who has made a habit of criticizing the NATO alliance as nearing “brain death” and no longer “pertinent” since the disappearance of the Warsaw Pact, that captured attention.

Mr. Macron wants NATO to act as more of a political body, a place where European members have equivalent status to the United States and are less subject to the American tendency to dominate decision making.

A Europe better able to defend itself, and more autonomous, would make NATO “even stronger than before,” Mr. Macron insisted. He said Europe should be “much more in charge of its own security,” increasing its commitments to spending on defense to “rebalance” the trans-Atlantic relationship.

That is not a widely shared view among the many European states that do not want to spend the money required, and the nations of Central and Eastern Europe are unwilling to trust their security to anyone but the United States.

Mr. Macron also urged that the renovation of NATO’S security abilities should involve “a dialogue with Russia.” NATO has always claimed that it is open to better relations with Moscow, but that Russia is not interested, especially as long as international sanctions remain after its seizure of Crimea from Ukraine about seven years ago.

But Mr. Macron, speaking in English to answer a question, also argued that Europe could not count on the United States as much as it had in past decades. “We must take more of the burden of our own protection,” he said.

In practice, it will take many years for Europe to build up a defense arm that would make it more self-reliant. But Mr. Macron is determined to start now, just as he is determined to increase the European Union’s technological capacities so that it can become less dependent on American and Chinese supply chains.

Mr. Biden, in contrast, wants to deepen those supply chains — of both hardware and software — among like-minded Western allies in an effort to lessen Chinese influence. He is preparing to propose a new joint project for European and American technology companies in areas like semiconductors and the kinds of software that Russia exploited in the SolarWinds hacking.

It was Ms. Merkel who dwelled on the complexities of dealing with China, given its dual role as competitor and necessary partner for the West.

“In recent years, China has gained global clout, and as trans-Atlantic partners and democracies, we must do something to counter this,” Ms. Merkel said.

“Russia continually entangles European Union members in hybrid conflicts,” she said. “Consequently, it is important that we come up with a trans-Atlantic agenda toward Russia that makes cooperative offers on the one hand, but on the other very clearly names the differences.”

While Mr. Biden announced he would make good on an American promise to donate $4 billion to the campaign to expedite the manufacturing and distribution of coronavirus vaccines around the world — a move approved last year by a Democratic-led House and a Republican led-Senate — there were clear differences in approach during the meeting.

Underscoring the importance that the European Union accords to Africa, Mr. Macron called on Western nations to supply 13 million vaccine doses to African governments “as soon as possible” to protect health workers.

He warned that if the alliance failed to do this, “our African friends will be pressured by their populations, and rightly so, to buy doses from the Chinese, the Russians or directly from laboratories.”

Vaccine donations would reflect “a common will to advance and share the same values,” Mr. Macron said. Otherwise, “the power of the West, of Europeans and Americans, will be only a concept, and not a reality.”

Dr. Tedros Adhanom Ghebreyesus, the director general of the World Health Organization, on Friday also urged countries and drugmakers to help speed up the manufacturing and distribution of vaccines across the globe, warning that the world could be “back at Square 1” if some countries went ahead with their vaccination campaigns and left others behind.

“Vaccine equity is not just the right thing to do, it’s also the smartest to do,” Dr. Tedros said to the Munich conference. He argued that the longer it would take to vaccinate populations in every country, the longer the pandemic would remain out of control.