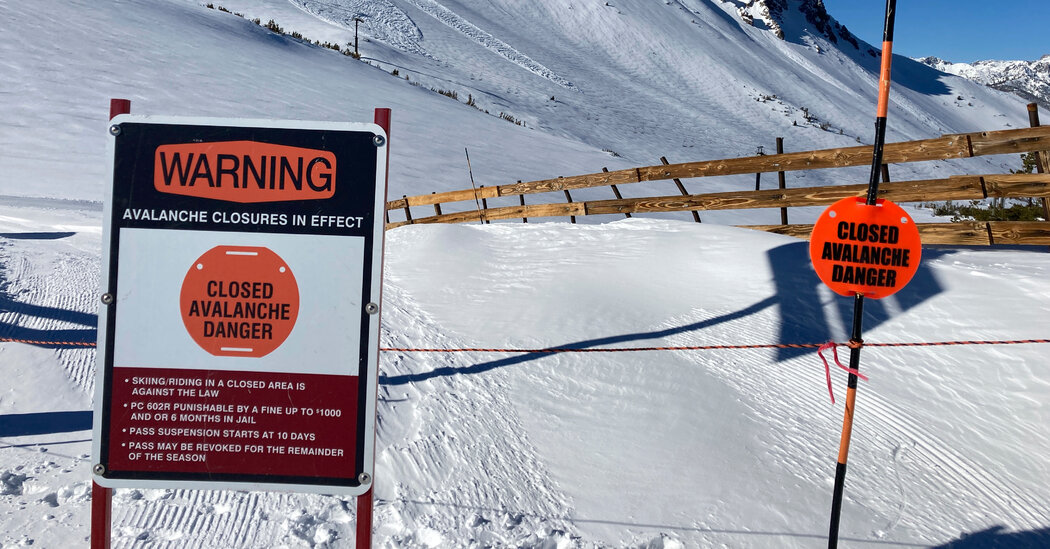 An avalanche warning has been issued for parts of Washington and Oregon as heavier-than-usual rainfall and snowfall is expected to hit part of the West Coast through Monday.

The warning was issued on Saturday by the Northwest Avalanche Center, which said at least 30 people in the United States had been killed in avalanches so far this season. That’s the highest number of fatalities since the 2015-16 season, according to the center.

The warning, a Level 4 on a scale of 5, said there was a high avalanche danger for parts of North Cascades National Park by the Canadian border, extending south through Okanogan-Wenatchee National Forest and into parts of Gifford Pinchot National Forest, which is about 140 miles southeast of Seattle.

The warning is in effect until Sunday evening and also covers part of Mount Hood National Forest, which is about 70 miles east of Portland, Ore.

The center’s warning came as parts of the Pacific Northwest braced for heavier-than-usual precipitation as a result of an “atmospheric river,” the National Weather Service said on Twitter.

That type of weather event — “a long river of moisture” that can hover over concentrated areas for a period of time — is expected to lead to very heavy rainfall or, in higher elevations, intense snowfall, said meteorologists at the Weather Service in Seattle.

The National Oceanic and Atmospheric Administration described such events as “rivers in the sky.” This one extends about 3,000 miles, from the coast of British Columbia to the coast of Hawaii, said Dustin Guy, a Weather Service meteorologist.

Though Seattle may see about only half an inch of rain, coastal areas and mountain regions can expect up to three inches, said another Weather Service meteorologist, Matthew Cullen. In high-elevation places, like the Cascade Mountains, parts of which are more than 4,000 feet above sea level, one to two feet of snow may fall, he said.

A handful of atmospheric rivers have hit the area each season, and this one, so far, is expected to be moderate in terms of precipitation and duration, Mr. Cullen said. Still, it is coming to the region shortly after a particularly intense snowfall.

A total of about half an inch of snow fell in Seattle in December and January, he said. Then, nearly 12.5 inches of snow fell over a three-day period ending on Feb. 14.

“There was definitely several hours of just consistent snow on the order of about an inch an hour,” Mr. Cullen recalled.

Americans have very recently seen what deadly, record-low temperatures can do. A bone-chilling winter storm that blanketed parts of the South and the central United States last week has strained the energy supply in Texas and left millions without adequate heat and water supplies.

According to the avalanche center, the weather conditions on Sunday will make traveling in avalanche terrain dangerous.

“Heavy snow, wind and rain will rapidly load the snowpack and produce large natural avalanches,” Andrew Kiefer, an official with the center, warned in a forecast. “Very dangerous conditions will continue through Monday.”

A snowmobiler in Wyoming and a backcountry skier in Colorado both died in separate avalanches on Dec. 18, the first casualties of the season, according to the center.

The next day, two backcountry skiers in Colorado were killed in avalanches. The most recent death was near Sherman Peak in Idaho, when a snowmobiler was killed on Saturday.