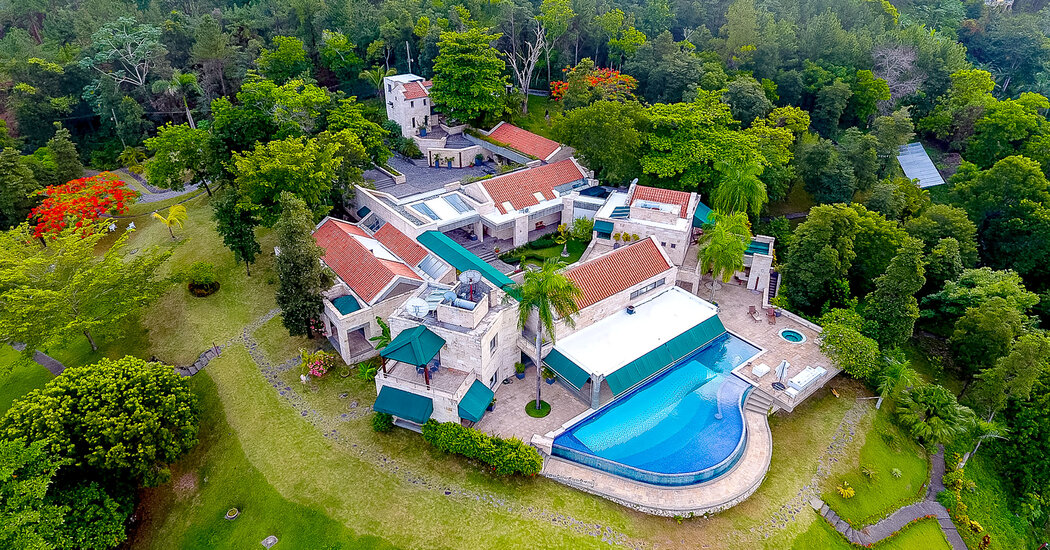 A Sprawling Complex Outside Santo Domingo

This 12.5-acre property drapes over the peak of a sweeping mountain range in rural Pedro Brand, a northwestern suburb of Santo Domingo, the capital of the Dominican Republic.

The complex, known as Compostela del Camino, includes a five-bedroom, seven-bath main house, a separate three-bedroom house for staff and about two acres of gardens with fruit trees.

The 10,932-square-foot house was custom-built for the current owners in 2010 using coral stone (native to the Dominican Republic), concrete, marble, precious woods and ceramic roof tile. It rings around a sloping, landscaped courtyard that offers clear lines of sight through the interiors to the pool deck and the verdant mountains beyond.

The design, maximizing the soft natural light from the north, is meant to facilitate indoor-outdoor living and preserve the natural setting, said Cesar J. Herrera G., the owner Provaltur International, which has the listing.

“When you pass through the main door and walk onto the terrace, you think, ‘Where am I?” Mr. Herrera said, noting that Compostela del Camino looks less like a quintessential Pedro Brand building and more like what is typically built in the Dominican Republic’s resort communities. “Being in the middle of the mountains inside a huge home like this is not normal.”

From the gated entrance, a 200-yard stone wall and manicured tropical vegetation curve with the driveway before reaching the covered car park. On the left is the two-story staff house with a tiled roof and coral stone, followed by the courtyard, which is visible through a slatted sliding door.

The main house unfolds in tiered sections. The open-air foyer, which features a concrete-block-and-steel-beam overhang and walls covered in polished coral stone, gives way to the minimalist courtyard straight ahead and a discreet stairwell to the right connecting to the second-floor guest bedrooms and bathrooms.

A cascading coy pond and small grassy area flank the courtyard steps and landing, leading to the great room, with marble floors and 20-foot ceilings. Large glass-and-wood sliding doors open to an outdoor lounge, Jacuzzi and infinity pool with unobstructed views of the green mountains.

The dining room, situated to the left of the great room, has a lower ceiling and built-in shelving. It connects to a large kitchen with access to a hallway and staircase up to the second floor, where the primary bedroom takes up much of the space. It includes a walk-in closet, an en suite marble-clad bathroom and a private terrace. A large gym cloaked in natural light and another guest room are also on this level.

To the right of the great room is a study with bookcases on every wall. Both spaces have access to the outdoor deck.

A walking trail follows the curve of the house and pool, then continues down the hillside, leading to a series of country-life staples: a greenhouse, chicken coop, bunny pen, horse stables and doghouse.

Unlike many nearby properties, Compostela del Camino was designed as a permanent residence, Ms. Herrera said. It is close to the Autopista Duarte highway, which carries drivers to Santo Domingo, on the island’s southern shore, in about 30 minutes. Las Américas International Airport in Santo Domingo is another 30 minutes. Punta Cana, one of the country’s popular beach destinations, is 135 miles east.

Over the past five years, an expanding tourism industry, a stable economy and friendly tax laws have brought a wave of international buyers to this Caribbean nation of about 11 million residents. According to local agents, the coronavirus pandemic did little to slow that momentum, even as travel bans hampered businesses.

Agents also reported a rise in the number of Dominican nationals searching for single-family rentals with backyards and gardens away from the city centers in Santo Domingo and Santiago. Sales to locals increased dramatically during the summer, and when the country’s borders reopened in July, international interest quickly returned.

“Investors and people who could afford second homes here were buying like crazy,” said Melquis Segura, an agent with Santo Domingo-based ApartamentosRD. “Even with all this activity, prices have stabilized. I haven’t experienced any growth bigger than 7 to 10 percent.”

Normally, the Dominican Republic’s busiest buying season is December through March, but the pent-up demand and renewed interest in vacation properties caused the market to accelerate by three months. By September, foreign buyers were flooding in, said Sergio Llach, the chief executive of Dominican Republic Sotheby’s International Realty.

Mr. Llach said at least 15 percent of his clients toured listings virtually and bought sight unseen in 2020, while others who were able to travel visited as soon as allowed (the country has three international airports). Many were regular visitors. “The people who buy in the Dominican Republic have been here at least 10 times before,” he said. “They’re confident in what they want.”

In Casa de Campo, a luxury gated community in the city of La Romana, about an hour east of Santo Domingo, the number of villas sold last year increased 23 percent over 2019, according to Casa de Campo Real Estate. Villa prices range from $350,000 to over $6 million depending on size, age and proximity to the ocean. (The Dominican Republic uses the Dominican peso, but property transactions are often done in U.S. dollars.)

Inventory under $1 million has dwindled, a result of the initial rush of activity and would-be sellers pulling their homes off the market. Mr. Llach said that before the pandemic, there was typically a surplus of lower-end homes that would take two to three years to sell. Now sales are taking six months. “My personal opinion is that this year, only the majority of big, high-end properties will sell, since everything under $1 million has been taken up,” he said. “There’ll be less sales in 2021, but at a higher value overall.”

In other beachside destinations such as Sosúa, Las Terranas and Punta Cana, rising interest from foreign investors has led to a flurry of residential construction. Cheryl Henderson, regional operating principal for Keller Williams Punta Cana, said that at least 90 projects are underway in the area, ranging from oceanfront villas in resort communities to condominium blocks and golf course-adjacent single-family homes. In the past five months, she’s seen a growing trend: The region is moving beyond the condo and retiree markets and becoming a more desirable destination for families.

Who Buys in the Dominican Republic

North Americans have long been the most active foreign buyers in the Dominican Republic, thanks to proximity and ease of travel to and from the island. Thirteen nonstop flights currently operate to Santo Domingo from both the U.S. (most often from New York and Miami) and Canada.

“About 30 percent of our clientele are U.S. citizens,” said Mr. Llach. He also noted a recent spike in Puerto Rican and French investors: “France has been off the charts this year.”

Dominicans who primarily live in the U.S. and Europe but buy second homes in their native country also make up significant portion of the market, said Alberto Bogaert, a sales associate with Mudate and president of the Asociación de Agentes y Empresas Inmobiliarías. “A lot of them may buy in Santiago or Santo Domingo, where they have family,” he said, “or they’ll buy more inland in Punta Cana.”

There are no restrictions on foreigners buying property in the Dominican Republic.

It’s common for international buyers to hire a local lawyer to facilitate a purchase. Mr. Herrera said the fee for a property like Compostela del Camino could be around $12,000.

Closing costs include a 3 percent transfer tax to the seller, as well as a notary fee (up to 1 percent) and a stamp tax of 1.3 percent.

Domestic mortgage loans are available, but most foreign buyers pay in cash or receive financial assistance from outside lenders since interest rates from banks in the Dominican Republic are much higher than in the U.S., Mr. Segura said.