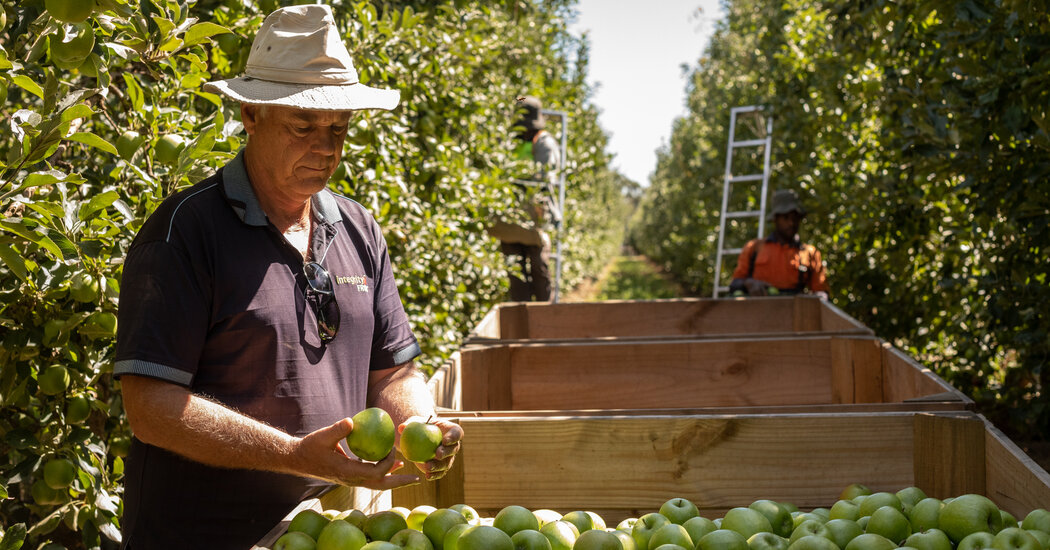 SHEPPARTON, Australia — Peter Hall ran a hand over the Gala apples sitting in a wooden crate on his orchard in southeastern Australia, lamenting the yellow tinge of fruit that would ideally be crisp red and green.

With the borders closed to the backpackers who do much of the country’s farm labor, Mr. Hall was short 15 workers. That had left him racing against the clock. Just a couple of extra days on the tree, and apples can be relegated to low-profit juice.

“We’ve never faced a worker shortage like this in my 40 years,” Mr. Hall said. “I suspect for each lot of crop, we’ll just not get there in time.”

The pandemic has disrupted the rhythms of labor and migration worldwide. In Western Europe, for example, borders were tightened early last year, keeping out seasonal workers from Eastern Europe.

But in isolated Australia, the pandemic has delivered a particularly sharp blow, exposing the unstable foundation of its agriculture industry, a growing $54 billion-a-year goliath that for years has been underpinned by the work of young, transient foreigners.

Measures to keep the coronavirus out of the country have left Australia with a deficit of 26,000 farmworkers, according to the nation’s top agriculture association. As a result, tens of millions of dollars in crops have gone to waste from coast to coast.

In the state of Victoria, rows of baby spinach and rocket, also known as arugula, have been plowed back into the earth, and peaches have been sent to the shredder. In Queensland, citrus growers have bulldozed acres of trees and left blueberries to rot. And in Western Australia, watermelons have been slashed and dug under.

This enormous destruction has fueled rising calls for Australia to rethink how it secures farm labor, with many pushing for an immigration overhaul that would give agricultural workers a pathway to permanent residency.

The current system was never intended to be a permanent solution to farmers’ decades-long labor struggles. But as the industry expanded and fewer Australians were willing to pick crops, the so-called backpacker program offered a lifeline.

Since 2005, the government has steered young travelers to farms by offering extensions of working holiday visas from one year to two for those who have completed three months of work in agriculture. Backpackers can earn extensions by working in other industries like construction or mining, but 90 percent do so through farm work.

In a normal year, more than 200,000 backpackers would come to Australia, making up 80 percent of the country’s harvest work force, according to industry groups. Now, there are just 45,000 in the country, according to government data.

Attempts to fill the labor shortage with unemployed Australians have been largely unsuccessful. Only 350 applicants signed up for a federal government program that offers subsidies of 6,000 Australian dollars, or about $4,600, to work in rural areas. A last-ditch proposal by one state government to use prison labor was shelved after an uproar by farmers.

So the federal government has flown in workers from nearby Pacific islands, which have largely avoided the pandemic. It’s part of an existing program that is one of Australia’s main sources of aid to the Pacific.

With border restrictions in place, the arrangements have sometimes been convoluted.

In January, after months of urging from the federal government and industry groups, Victoria agreed to take 1,500 Pacific island workers. They must first quarantine for two weeks on the island of Tasmania before being flown to Victoria. In exchange, 330 Tasmanians stranded overseas will be able to return through Victoria’s quarantine hotels.

Nationwide, only about 2,400 workers have been flown into the country since the borders were shut, according to the National Farmers’ Federation.

For years, industry groups have been pushing for a dedicated agriculture visa, but the idea has repeatedly run into obstacles.

The last time it was seriously raised, in 2018, it caused alarm in Pacific island nations that said it could divert money away from their workers. Some academics said such a move could diminish Australia’s influence in the region, allowing China to make greater inroads.

The idea was quietly shelved.

A dedicated, stable work force would benefit not just farmers. It could also reduce abuses that have become rampant under the temporary labor system, according to researchers and unions.

“The work force was easily exploitable, and there were no protections,” Joanna Howe, an expert on temporary labor migration at the University of Adelaide, said of the working holiday visa. “It pulled down wages and conditions in the industry. Noncompliance became the norm, and as a result, locals left the industry.”

The abuses, exposed in a string of media reports in recent years, have run the gamut.

Kiah Fowler, 23, a backpacker from Pennsylvania, arrived in Bundaberg, Queensland, in March 2020 to pick strawberries after having lost her hospitality job elsewhere in Queensland.

“There are some wonderful farmers, but I happened to land myself in a region that’s known for some backpacker exploitation,” she said. “I was desperate for money, and thought it couldn’t be as bad as people said it was. It was.”

She and the other backpackers, she said, were aware that they were being taken advantage of, “but during Covid, a lot of us were like, ‘What choice do we have?’” Eventually, she left the job.

Ben Rogers, the general manager for workplace relations and legal affairs at the National Farmers’ Federation, acknowledged that the industry’s reputation for underpayment and mistreatment of workers was not completely unearned.

But he added that the organization was doing what it could through quality assurance programs and calls for new hiring regulations.

There are hopes that addressing these problems could help bring some Australians back into the industry. Farmers talk about changing how the industry is viewed, starting in school, and about technological advancements that would make it less labor intensive.

The Australian Workers’ Union has lodged a challenge with the Fair Work Commission to mandate an industry minimum wage. It believes that a wage floor would reduce the likelihood of underpayment and encourage a more local work force.

But these potential solutions, as well as changes in immigration rules, are years off, if they ever happen. Right now, farmers are contending with national borders that were closed in March 2020 and are unlikely to reopen until 2022.

The area around Shepparton, a city two hours north of Melbourne, where Mr. Hall was rushing to harvest his apples, is one of the worst hit by the labor shortage.

Usually, backpackers would be flocking to Victoria Park Lake, in the middle of town, to use its free barbecue facilities and set up tents and park vans. This year, though, it’s quiet and still.

Hostels, too, are mostly empty.

One Australian, Brett Jones, 38, said he would return to a construction job soon.

“With construction, at the end you feel like you’ve accomplished something, rather than just filled a bin of pears for someone,” he said.

Besides, he admitted, “I’m not very good at fruit picking.”

“My mind keeps wandering,” he said. “I keep thinking there has to be an easier way to make money.”