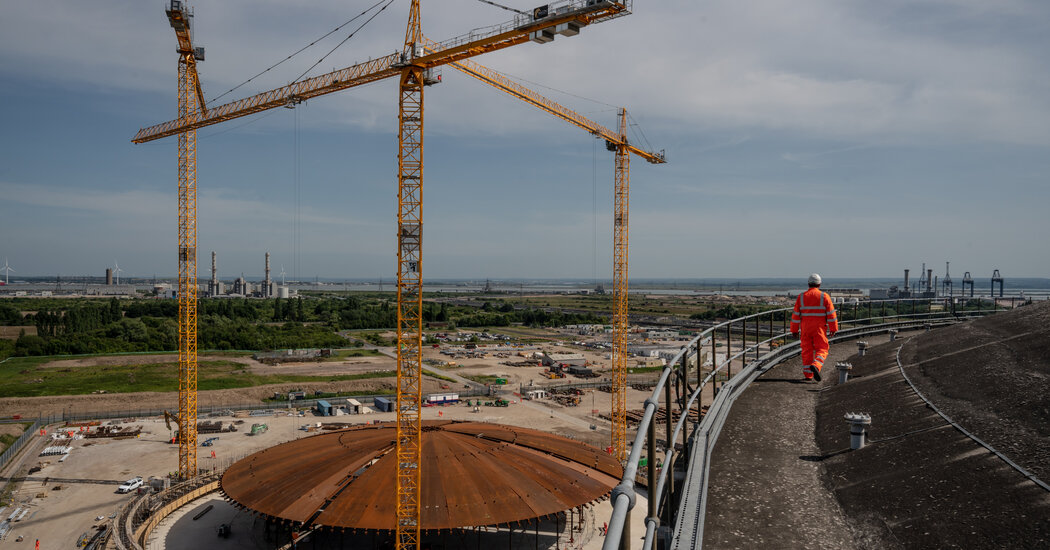 This article is part of a special report on Climate Solutions, which looks at efforts around the world to make a difference.

ISLE OF GRAIN, England — The placid waters near the entrance to the River Medway look more suited for sailboats and other pleasure craft, but some of the biggest ships in the world twist their way to a pier here.

Simon Culkin, the importation terminal manager at the facility called Grain LNG, jokes about making sure that none of these vessels are helmed by a “learner driver.”

The behemoths, some of them more than 1,000 feet long, bring cargoes of liquefied natural gas. Once the ships lock onto a rack of pipes on the jetty, their frigid fuel flows into massive concrete-clad storage tanks 160 feet tall.

In recent months, energy markets in Europe have experienced the greatest disruption in memory, as well as record prices, as tensions built with Russia over Ukraine. But L.N.G., largely from the United States, has cushioned the blow in Britain and been a lifeline for Europe.

Yet even as the imports have advanced the European Union’s goal of slashing its dependence on Russian energy, the growing reliance on the fuel also comes with potentially negative implications, including uncertainty for its future and concerns about its impact on climate.

“Countries will need to source some gas if they are not getting supplies from Russia,” said Doug Parr, chief scientist and policy director at Greenpeace UK. “The climate risk is that there is a lock into new gas infrastructure which proves quite hard to retire,” he added.

European imports of L.N.G. rose by more than 50 percent compared with the period a year earlier in the first five months of 2022, according to Bernstein, a Wall Street research firm. Britain saw a surge of L.N.G imports in the winter months, with January the highest on record.

Britain is in relatively better shape in terms of energy security than much of the rest of Europe because it produces substantial amounts of gas from offshore fields, whereas most European Union members have little of their own output.

“Historically, L.N.G. has been the marginal top-up fuel for the U.K.” said Jack Sharples, a research fellow at the Oxford Institute for Energy Studies, a research organization.

Britain sends some of the gas received at its three terminals to the continent through pipes under the North Sea.

The increases in liquefied gas have helped Europe compensate for shortfalls in gas from Russia. Increased imports of L.N.G. are the most important facet of the European Union’s strategy for reducing dependence on Russian gas.

Europe’s Shift Away From Fossil Fuels

The European Union has begun a transition to greener forms of energy. But financial and geopolitical considerations could complicate the efforts.

While Russia has long supplied a wide range of energy commodities to Europe, Moscow’s chokehold on supplies of gas, used for heating, cooking, generating electric power and industry, has grown particularly strong, supplying about a third of Europe’s consumption in recent years.

“We simply cannot rely on a supplier who explicitly threatens us,” Ursula von der Leyen, president of the European Commission, said earlier this year as she outlined a proposal to make Europe independent of Russian energy.

A wide range of shippers have sent fuel to Europe, but the major increases have come from the United States, which, because of the boom in shale gas output, has grown from a standing start eight years ago to one of the world’s three largest L.N.G. exporters, along with Qatar and Australia. At times L.N.G. has exceeded the flow of Russian gas. About half of the ships that docked at Grain LNG over the last year came from the United States.

In February, President Biden agreed to ensure that at least 15 additional billion cubic meters of gas, equivalent to about 10 percent of imports from Russia, reached Europe this year, a goal that has already been met.

Unlike most natural gas, which comes through pipelines, L.N.G. can be shipped from anywhere that has invested in the facilities needed to chill it to a liquid, a multibillion-dollar investment, so it can go to places like the Isle of Grain with its mazes of equipment to turn it back into a vapor.

“The key is the flexibility,” said Paul Sullivan, head of systems capability and risk at National Grid, the utility that owns the L.N.G. terminal.

L.N.G. is an energy source that can make a difference in a hurry. Chilling natural gas to minus 260 degrees Fahrenheit reduces its volume to one six hundredth of its volume as a gas. A large tanker can carry enough fuel to light up to 70,000 homes for a year, according to an industry estimate.

But even as Europe embraces L.N.G. with disclaimers from leaders like Ms. von der Leyen about eventually weaning itself off gas, climate activists worry that it could be investing many billions of euros in an expensive new program based on fossil fuels — one that, as Mr. Parr said, is then difficult to retire.

That is already happening. European countries are scrambling to build facilities to receive L.N.G. After Russia’s invasion of Ukraine, Germany has found itself in the dangerous predicament of being the largest buyer of Russian gas and yet having no L.N.G.-receiving terminals in case Moscow cuts off the fuel, as it is signaling it may do.

Berlin now plans to build as many as four receiving units. Finland, Estonia, Italy and the Netherlands are all considering building terminals or expanding existing ones. Some of these units are likely to be floating installations that can be towed elsewhere when their leases end.

The liquefied gas is coming at a steep price. In most years, the major markets for L.N.G. are Asian countries like Japan, South Korea and China. During the first five months of 2022, Asian imports fell by 8 percent, in part because of slowing demand from China caused by Covid lockdowns.

What’s helping to shift gas away from Asia toward Europe is not so much promises from politicians like Mr. Biden but astronomical prices — currently around nine times those of two years ago.

“European prices have to rise to attract cargoes from Asia into Europe to fill the hole that has been created by Russia,” said Neil Beveridge, an analyst at Bernstein. “That requires some really high prices to do that.”

Futures prices have been around $40 per million British thermal units, an industry measure. In energy terms that is comparable to more than $200 a barrel for oil, roughly double the current price for Brent crude, the international benchmark.

European businesses that use large volumes of gas find themselves at a competitive disadvantage. Earlier this month, CF Industries, a large fertilizer producer based in the United States, said it was proposing to close one of its two British plants, whose process relies heavily on gas, because futures markets suggest that such factories in Europe will be high cost “for the foreseeable future.”

There are worries about gas shortages in Europe this winter that would not only keep prices high but also lead to a variety of undesirable options, including burning more coal and, as a last resort, rationing gas by shuttering factories.

Quick or easy solutions to Europe’s energy problems don’t seem to be available. There is just not enough L.N.G. around or likely to come online in the next few years to replace all of Russia’s exports to Europe.

While the high prices of today are likely to lead to more L.N.G. facilities’ being built, especially in the United States, at least five years is required to build new export facilities so filling any hole left by Russia will take time.

Investors will also be uncertain about whether to go ahead. Europe’s intentions are hard to fathom. Ms. von der Leyen recently visited Egypt and Israel, which have large gas fields, in an effort to drum up new supplies. The agreement reached to expedite gas supplies for Europe was also tempered by language warning that gas consumption in the European Union was expected to begin to decline by 2030, perhaps too soon to give assurance to investors contemplating putting billions of dollars into L.N.G. facilities.

Today’s high L.N.G. price may lead Europe to turn away even more rapidly than previously planned from gas, building more wind and solar energy facilities. If Europe is serious about hitting emissions reduction targets, “the longevity of L.N.G. demand in Europe is at risk,” Mr. Di Odoardo said.

National Grid is hedging its bets. The company is adding another storage tank, but it is also looking to a greener future that might involve facilities for importing or making hydrogen, a potentially cleaner substitute for natural gas, and other futuristic energy sources on its vast 600-acre site.

The flatlands here hold not only the facilities for handling gas but also several electric power plants and an import terminal for aviation fuel, all within easy reach of London. For Mr. Culkin, it is an energy cornucopia that “is not that easy to find.”