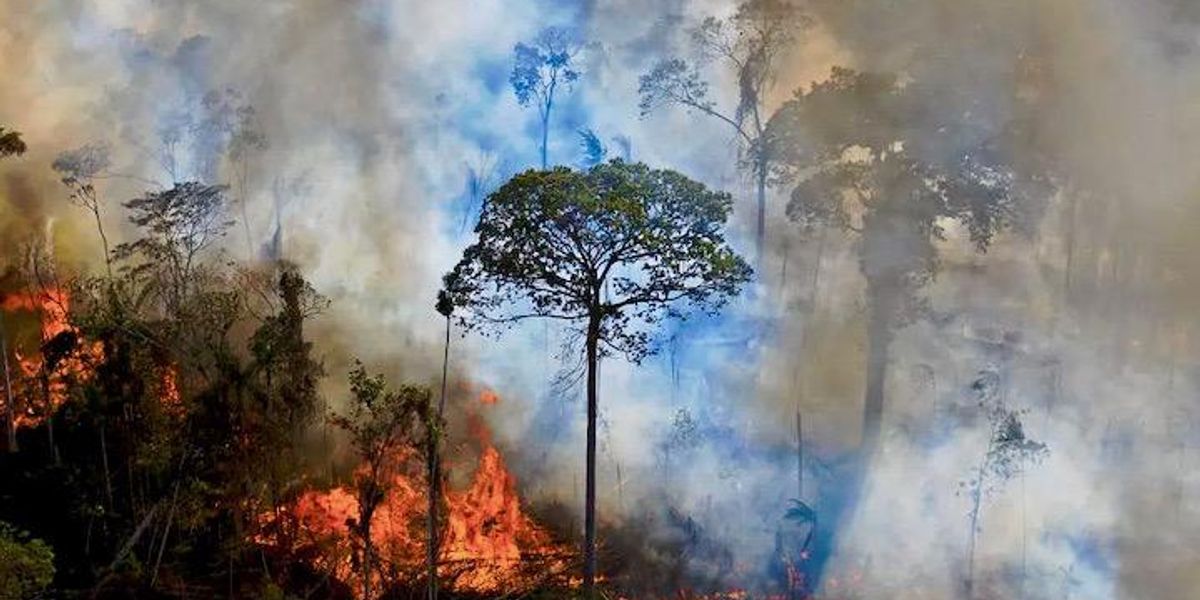 The Brazilian government published data Friday showing that more than 2,500 fire hotspots were recorded in the Amazon rainforest last month, the highest number for June since 2007—one of the worst years ever for the critical ecosystem.

“The Biden administration has only legitimized the Brazilian government’s anti-Indigenous and anti-environmental agenda.”

The latest report from Brazil’s National Institute for Space Research estimates that the Brazilian Amazon has lost 1,450 square miles of jungle since the start of 2022.

Greenpeace Brazil said in response to the alarming figures that the far-right Bolsonaro government’s systematic rampage against basic environmental protections is responsible for the surge in rainforest fires and overall deforestation, which have helped transform parts of the Amazon—long known as a key carbon “sink”—into sources of planet-warming greenhouse gas.

“Agribusiness is hitting new records for forest destruction as the dry season arrives in the Amazon,” said Cristiane Mazzetti, a spokesperson for Greenpeace Brazil. “Illegal burnings and deforestation have accelerated over the last three years as a direct result of the Brazilian government’s anti-environmental agenda that encourages the destruction of the forest.”

“If this trend does not change,” Mazzetti added, “we will approach the tipping point of no return in which the Amazon could fail as a rainforest.”

Brazilian academics have warned in recent months that a Bolsonaro victory in the October presidential election would mean total demise for the Brazilian Amazon. Recent polling shows that Bolsonaro is trailing leftist former President Luiz Inácio Lula da Silva, who has vowed to pursue “net-zero deforestation” if elected.

“If Bolsonaro remains in the power of presidency, it’s hopeless in terms of the environment,” Marcio Astrini, executive secretary of the São Paulo-based Climate Observatory, told HuffPost in April, a record-shattering month for Amazon deforestation.

“There will be more deforestation,” said Astrini. “The Amazon will fast forward to its collapse point.”

Environmental groups have voiced dismay at the Biden administration’s failure to confront Bolsonaro on the international stage over his government’s assault on the Amazon. The U.S. is Brazil’s second-largest trading partner.

Last month, during the U.S.-hosted Summit of the Americas in Los Angeles, President Joe Biden went as far as to praise Bolsonaro for trying to “protect the Amazon.”

“In addition to being divorced from reality, Biden’s statement is remarkably tone-deaf,” Maria Laura Canineu and Luciana Téllez Chávez of Human Rights Watch wrote on the final day of the summit, where the two leaders met for the first time. “Biden has shamefully squandered the opportunity to leverage his meeting with Bolsonaro to support the courageous defenders of the Amazon.”

“These defenders are putting their lives on the line to protect the world’s largest rainforest and a vital bulwark against climate change,” they continued. “Biden should correct this mistake and press Bolsonaro to reverse his damaging policies, urging Bolsonaro to get Brazil back on track in fighting deforestation and protecting forest defenders from violence.”

Diana Ruiz, the head of forests at Greenpeace USA, said in a statement Friday that “up to now, the Biden administration has only legitimized the Brazilian government’s anti-Indigenous and anti-environmental agenda.”

“The U.S. has a responsibility to act and stop making deals with President Bolsonaro, who continues to wage an assault against Indigenous Peoples and environmental defenders,” Ruiz added.