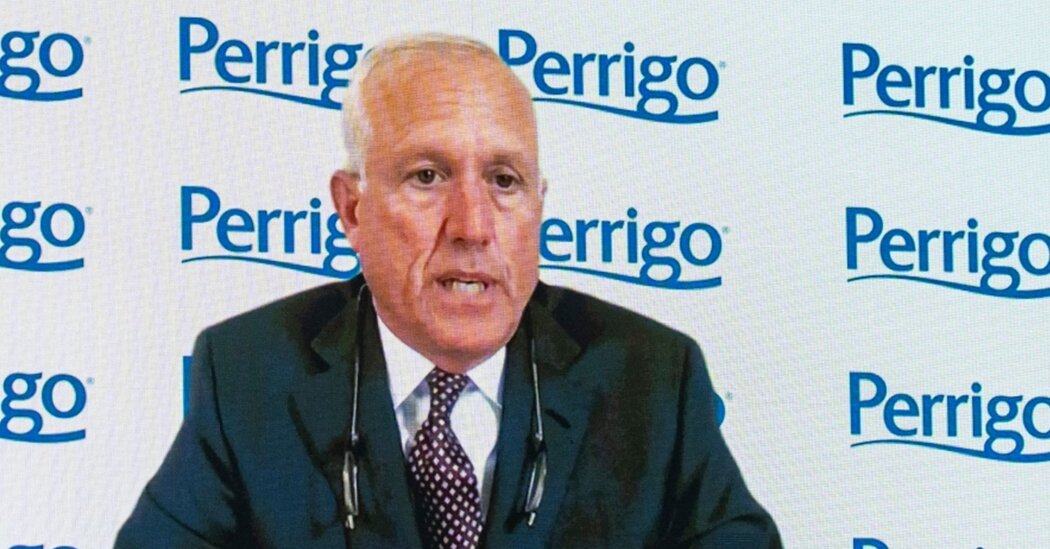 The drug company Perrigo had a problem.

Consultants at the giant advisory firm EY had devised an elaborate arrangement that would allow Perrigo, one of the country’s leading makers of nonprescription drugs, to avoid more than $100 million in federal taxes. But the company’s outside auditors, at the accounting firm BDO, were questioning the setup’s propriety.

Perrigo soon replaced BDO with EY as its auditor. At least one EY official, too, expressed concern that the tax shelter his colleagues had designed was overly aggressive.

Even so, auditors at EY, also known as Ernst & Young, eventually blessed the transactions, which federal authorities now claim were shams, according to previously unreported documents made public in a court case last year.

Accountants have a reputation as bean counters. In reality, their audits are a linchpin of global capitalism: Investors need to be able to trust that companies’ numbers are reliable and have been reviewed by credible outsiders. Having a reputable auditing firm sign off on your financial statements is therefore a prerequisite to being listed on a major stock exchange and attracting significant investments.

To avoid suspicions that auditors are overlooking problems in order to please big clients, accounting firms are supposed to keep an arms-length relationship with the companies they oversee.

But in the two decades since a series of corporate accounting scandals spotlighted the lack of independence between auditing firms and their leading clients, the problem remains. Today, the Big 4 accounting firms all offer giant companies a wide array of consulting and tax-planning services — at the same time they are serving as ostensibly independent outside auditors.

Internal EY emails and memos — made public last year in a court case in which the I.R.S. is challenging Perrigo’s tax arrangements and accusing EY of constructing “an abusive tax dodge” — provide a rare inside look at the potential conflicts of interest that arise as a single firm constructs tax shelters and simultaneously audits its own work.

“When you are a consultant, you are partnering with management. You are trying to make management look really good,” said Lynn Turner, a former chief accountant at the Securities and Exchange Commission. “That’s not the role of an independent auditor.”

While conflicts of interest among accounting firms have troubled investors for decades, there are signs that the conduct of the Big 4 firms is receiving new regulatory scrutiny.

The Securities and Exchange Commission is reportedly conducting a broad review of conflicts of interest involving the variety of services that the Big 4 provide to clients. Senior officials at two of the big accounting firms, EY and Deloitte, are now discussing plans to split their auditing and consulting arms into separate companies. And this year, lawmakers asked the Treasury Department’s inspector general to investigate the revolving door between the Big 4 firms and the government.

Nowhere is the tension over accounting firms’ multifaceted roles more pronounced than in the lucrative business of advising companies on how to slice their tax bills.

The Big 4 accounting firms — EY, KPMG, PwC and Deloitte — have emerged as perhaps the most powerful private-sector force in U.S. tax policy. They lobby federal officials to tweak tax rules to help their clients. A steady stream of lawyers from the firms rotate in and out of senior tax positions in the Treasury Department, where they write rules favorable to their former clients.

At the same time, the Big 4 firms help companies move profits out of the reach of the U.S. government. Then the companies’ auditors — often a different group of employees from the same firm that created the structures in the first place — have to sign off on the setups. In assessing their legitimacy and the effect on the client’s financial results, the auditors frequently consult with the colleagues who devised the tax strategies.

The I.R.S. is taking a dim view of these transactions.

The agency is challenging offshore tax arrangements at Coca-Cola, Facebook and Western Digital, alleging the companies owe the U.S. government billions of dollars as a result of moving too much of their profits abroad.

In all of those cases, the accounting firm that constructed the elaborate tax plan later signed off on the company’s books in its capacity as its independent auditor.

“The auditor is supposed to be a watchdog for shareholders. But when the audit firm designs, implements and testifies in court to defend sophisticated tax avoidance strategies for audit clients, they are providing an opinion on their own work,” said Francine McKenna, a lecturer at the Wharton School of the University of Pennsylvania and author of a widely read accounting newsletter. “The company has paid for a lap dog, not a watchdog.”

Perrigo declined to comment, other than to point to securities filings in which it disclosed that it had switched auditors. One filing said there had been “no disagreements” between Perrigo and BDO.

Brendan Mullin, a spokesman for EY, said the firm stood by its work for Perrigo. He noted that EY did not become Perrigo’s auditor until after BDO had signed off on Perrigo’s financial statements for the first year the tax arrangement was in place.

“We performed all necessary processes and procedures to complete our work and the advice was appropriate when given,” Mr. Mullin said.

In the early 2000s, a wave of corporate frauds, including at Enron, highlighted how auditing firms like Arthur Andersen at times were doing everything they could to please lucrative clients, rather than protecting investors from deceitful executives.

In 2002, lawmakers proposed a sweeping overhaul of the laws governing the accounting industry, including a crackdown on the conflicts of interests involving firms providing services other than audits.

But industry lobbyists managed to water down or eliminate those proposals. The Big 4 firms were ultimately allowed to keep their consulting businesses. Inside the firms, those divisions have grown faster than the mundane audit businesses.

If Perrigo had bought omeprazole from a manufacturer and then sold the pills to customers in the United States, its profits would have resided in America. They would have been subject to what at the time was the country’s 35 percent corporate income tax rate, among the world’s highest.

EY created a workaround. Perrigo set up a subsidiary in Israel, with no employees and no offices, to buy the omeprazole. Then that shell company sold the pills to Perrigo in the United States at a profit. That meant that Perrigo’s income on the pills largely remained in Israel rather than in the United States, out of reach of the I.R.S. And because of the vagaries of Israeli tax law, the profits weren’t taxed in Israel, either.

Perrigo was following a formula pioneered by Big Pharma: Drug companies like Merck and Pfizer have been leaders in cutting their U.S. taxes by using subsidiaries in low-tax countries like Ireland and Switzerland. The I.R.S. has challenged many such arrangements over the years, including one that Bristol Myers used to move profits to Ireland.

EY’s maneuver helped slash Perrigo’s U.S. tax bill by more than $90 million over four years, according to the I.R.S., and almost certainly by tens of millions of dollars more in subsequent years.

BDO, which is a small fraction of EY’s size, had been Perrigo’s auditor since at least 1994. Its duties included signing off on Perrigo’s public financial statements and its federal tax returns.

In June 2008, auditors at BDO expressed concerns about the tax plan that EY and Perrigo had devised, according to internal EY records made public during the litigation with the I.R.S. The auditors told Bill DeGood, Perrigo’s international tax director and himself a former EY employee, that they were worried about how Perrigo was divvying up the profits between Israel and the United States. If too much profit was going to the untaxed Israeli subsidiary, that could translate into an artificially low U.S. tax bill.

The BDO auditors noted that the arrangement “may be challenged by the I.R.S.,” according to an internal EY memo. The auditors proposed a more conservative method to allocate profits between the United States and abroad.

Perrigo executives enlisted officials at EY to defend the structure of the tax setup.

Two months later, BDO signed off on Perrigo’s financial statements for that year. It isn’t clear whether or how the auditors’ concerns were resolved.

By then, though, Perrigo had already decided to drop BDO as its auditor and to hire EY as a replacement.

Derek Burgess, a tax consultant in EY’s office in Grand Rapids, Mich., concluded along with some of his colleagues that Perrigo was pushing too much profit into the Israeli subsidiary — thus potentially underpaying its U.S. taxes. He was especially concerned because EY would have to sign off on Perrigo’s tax return, potentially exposing the accounting firm to liability, too, if Perrigo were later found to have underpaid taxes.

In February 2009, Mr. Burgess was preparing for a visit a few days later to Perrigo’s headquarters and was unsure how to proceed.

“I’m not sure how to handle Omeprazole where we all agree there is far to [sic] much profit” in the offshore entity, he wrote in an email to his boss, Anna Voortman. “Should we be concerned about the signing of the return?”

It is unclear what happened next, but a year later, when Perrigo filed its 2009 federal tax return, an EY official had signed off.

Mr. Burgess and Ms. Voortman didn’t respond to requests for comment. Mr. Mullin, the EY spokesman, said, “One email does not fully represent the position of EY, either at the time it was written or the time EY’s work was performed.”

Perrigo has paid EY nearly $112 million for auditing and $23 million for tax advice since 2009, according to securities filings data compiled by Audit Analytics, a data firm.

In 2014, the I.R.S. objected to EY’s entire arrangement, later calling it a “sham” that lacked “economic substance.” The I.R.S. sought $163 million in back taxes, interest and penalties.

Perrigo paid the amount in dispute and then, in 2017, sued the I.R.S. for a refund in federal court in Grand Rapids. (That is a common sequence for companies facing disputes with the I.R.S.)

In a court filing last August, Justice Department lawyers representing the I.R.S. used unusually strong language to criticize EY. They accused the firm of enabling a “shell game” and a “flagrant tax scheme gone awry.” They said EY produced unreliable economic analyses for Perrigo that justified the lucrative tax strategy but were “not grounded in fact or economic reality.”

The fight went to a federal trial last year. The judge hasn’t announced a verdict yet.

Regardless of the case’s outcome, Perrigo has found another way to permanently reduce its U.S. tax rate.

In 2013, just as the I.R.S. was voicing its initial objections to the Israeli tax arrangement, EY helped Perrigo execute a maneuver known as an inversion, in which it merged with an Irish company. (Three years later, the Obama administration made it harder for companies to pull off inversions.)

Perrigo now purports to be headquartered in Ireland and therefore largely exempt from taxes in the United States, which is home to almost all of its top executives and is by far its biggest market.