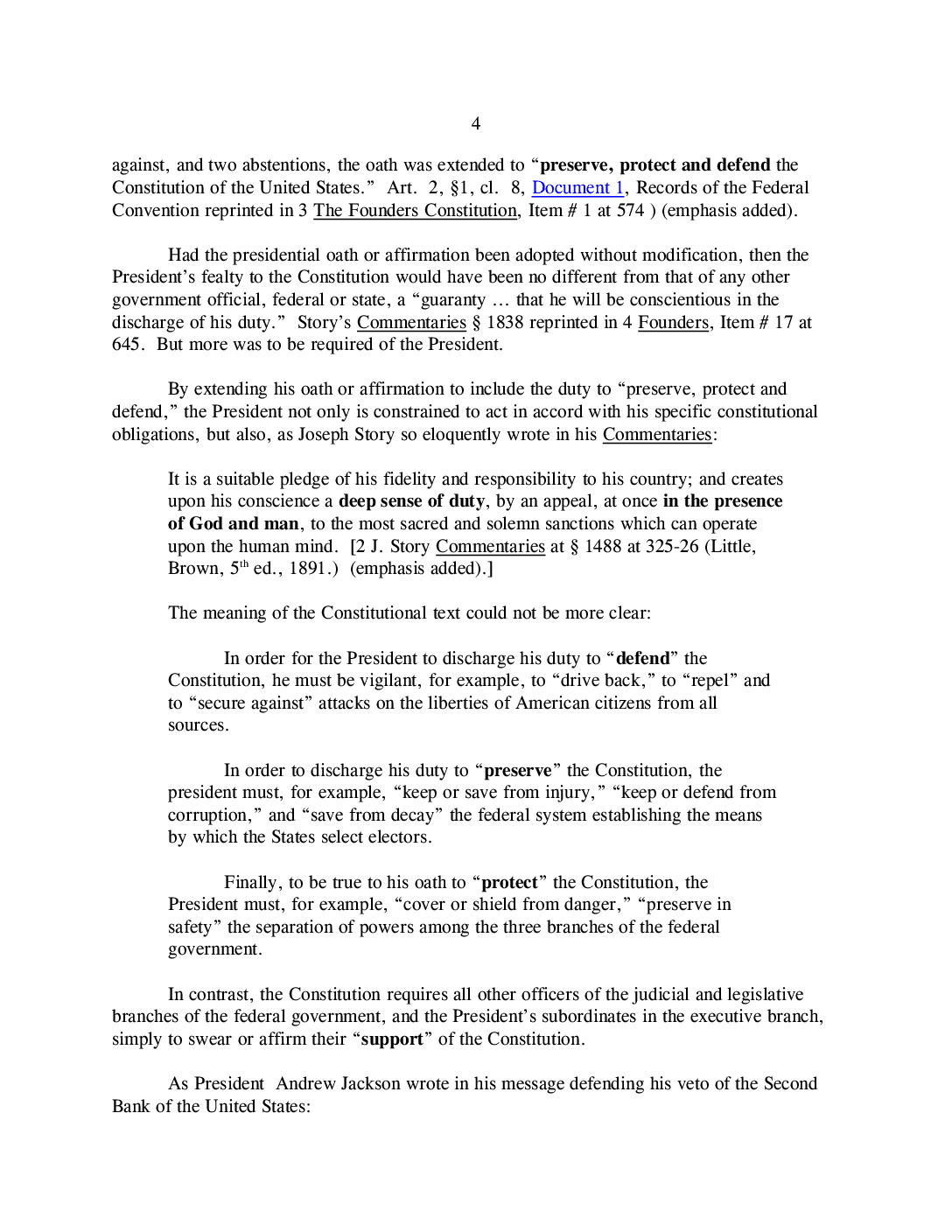 4 against, and two abstentions, the oath was extended to “preserve, protect and defend the Constitution of the United States.” Art. 2, §1, cl. 8, Document 1, Records of the Federal Convention reprinted in 3 The Founders Constitution, Item # 1 at 574 ) (emphasis added). Had the presidential oath or affirmation been adopted without modification, then the President’s fealty to the Constitution would have been no different from that of any other government official, federal or state, a “guaranty … that he will be conscientious in the discharge of his duty.” Story’s Commentaries § 1838 reprinted in 4 Founders, Item # 17 at 645. But more was to be required of the President. By extending his oath or affirmation to include the duty to “preserve, protect and defend,” the President not only is constrained to act in accord with his specific constitutional obligations, but also, as Joseph Story so eloquently wrote in his Commentaries: It is a suitable pledge of his fidelity and responsibility to his country; and creates upon his conscience a deep sense of duty, by an appeal, at once in the presence of God and man, to the most sacred and solemn sanctions which can operate upon the human mind. [2 J. Story Commentaries at § 1488 at 325-26 (Little, Brown, 5th ed., 1891.) (emphasis added).] The meaning of the Constitutional text could not be more clear: In order for the President to discharge his duty to “defend” the Constitution, he must be vigilant, for example, to “drive back,” to “repel” and to “secure against” attacks on the liberties of American citizens from all sources. In order to discharge his duty to “preserve” the Constitution, the president must, for example, “keep or save from injury,” “keep or defend from corruption,” and “save from decay” the federal system establishing the means by which the States select electors. Finally, to be true to his oath to “protect” the Constitution, the President must, for example, “cover or shield from danger,” “preserve in safety” the separation of powers among the three branches of the federal government. In contrast, the Constitution requires all other officers of the judicial and legislative branches of the federal government, and the President’s subordinates in the executive branch, simply to swear or affirm their “support” of the Constitution. As President Andrew Jackson wrote in his message defending his veto of the Second Bank of the United States: