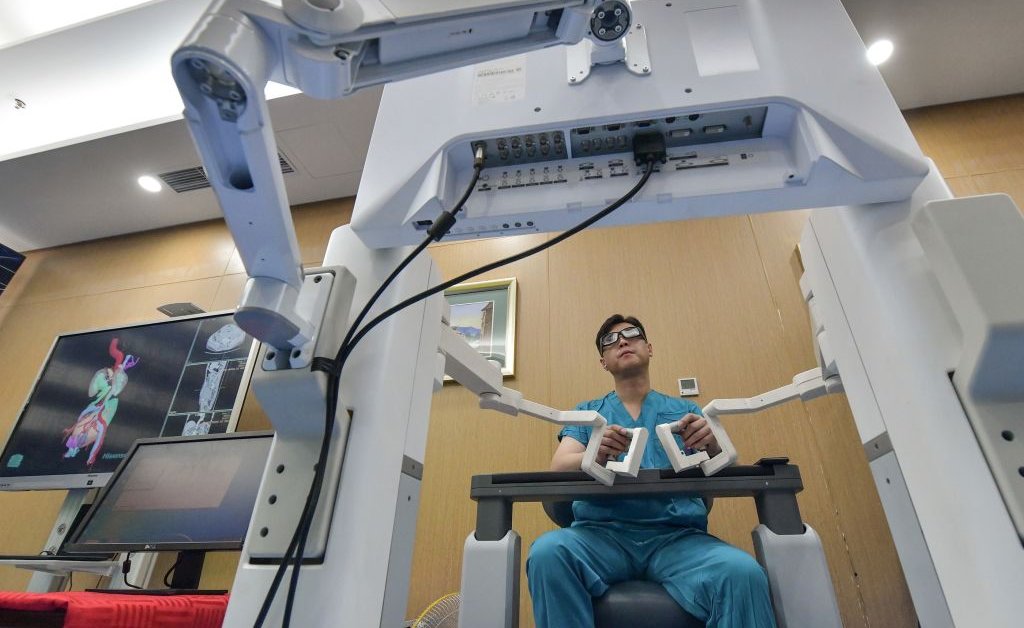 When Jodi Byfuglin, 56, was diagnosed with bladder cancer, it felt like cruel irony. Byfuglin had lost both her parents to cancer in their 50s, and as a single mother of two, she was all her kids had left. “I promised that I would not leave them,” Byfuglin says.

Bladder cancer is the sixth most common cancer in the United States, and older men are at highest risk. But about one-tenth of cases are in people younger than 55, and an estimated 19,480 women will be diagnosed with bladder cancer in 2022 (compared to about 61,700 men), according to the American Cancer Society. “I had no idea about bladder cancer,” Byfuglin says. “It’s like a silent killer; it goes from zero to 1,000 really quick.”

For high-grade or muscle-invasive bladder cancer, urologists perform a radical cystectomy in which they remove the patient’s bladder and some of the surrounding organs. In men, that can include the prostate and seminal vesicles; in women, the ovaries, fallopian tubes, and uterus.

Surgeons then create a new way for patients to urinate via one of three diversions: the urostomy, neobladder, or Indiana pouch.

The vast majority of patients choose the urostomy, in which surgeons create a stoma—a beefy red spout protruding from the belly—so that urine can flow from the kidneys, through an intestinal conduit, and out the body. Urine drains into a clear oval-shaped pouch attached to the stoma that needs to be emptied every four to six hours and changed twice a week. Of the three options, the urostomy is typically the shortest and simplest operation, with the fewest potential complications.

Byfuglin received the second most popular urinary diversion, the neobladder. Dr. Anne Schuckman, an associate professor of clinical urology at the University of Southern California, took out two feet of Byfuglin’s intestines, fileted it open, and formed a sphere that could collect urine inside her pelvis. Typically recommended for younger, healthier patients, the neobladder offers the closest thing to normal anatomy, but patients initially struggle with incontinence and may have to self-catheterize their neobladder to fully empty it. “I really didn’t want something external,” Byfuglin says. “It’s not that I’m vain, but I didn’t want people to see I have cancer. Or even to remind myself.”

The Indiana pouch is the final option, combining aspects of both the urostomy and neobladder. Surgeons use a piece of intestine to create a collection reservoir inside the abdomen but then connect this pouch to the skin to create a stoma. Unlike the urostomy, urine doesn’t naturally flow out this stoma, so patients need to insert a soft thin plastic tube into their Indiana pouch to relieve themselves. Although these patients have the highest urine control satisfaction, the Indiana pouch is the least common diversion because “somebody has to be willing to catheterize every three to four hours for the rest of their life,” Schuckman says.

Radical cystectomy with any urinary diversion is a life-saving procedure, but recovery can be challenging given a 35% complication rate in the hospital, according to a 2021 review of 66 studies in the British Medical Journal Open. In fact, Schuckman usually tells patients “to give themselves a year to really feel like they’re back at their physical baseline.” Although creating a new normal takes time, patients and health care professionals have tips for navigating the key challenges around living with radical cystectomy.

A 2018 study published in Cancer found that more than half of patients with bladder cancer were diagnosed with a mental health condition, such as bipolar, anxiety, or substance use disorder, after radical cystectomy. In particular, “there’s quite a bit of depression early on,” says Dr. Bruce Kava, professor of urology at the University of Miami.

North Carolina resident Allen Beckett, 71, had his radical cystectomy eight years ago and now volunteers with the Bladder Cancer Advocacy Network (BCAN). He’s often seen how radical cystectomy can damage one’s sense of self. For some people, it causes a jolt to their independence because they have to put their lives on hold to recover. Others struggle to accept the major changes to their body and, with a urostomy, having to wear a plastic pouch 24/7. “They got over the physical part of it, but they can’t get over the mental part,” Beckett says.

Beckett explains that he overcame his own struggles when “my brain kicked in and said, ‘you’re cancer-free, you’re alive, and you probably got several years ahead of you.’” While refocusing can help, he admits that adapting to his new body took a while. “Time is your ally and your friend,” he advises his fellow survivors. Beckett now wears darker patterned shirts to help cover his stoma and says he feels self-conscious only when wearing a suit. Stoma guards, support bands, underwear, bathing suits, and other specialized clothing can cover the urostomy pouch and help patients feel discreet, confident, and fashionable. “Most people can’t even tell,” Beckett says.

For those who continue to struggle with their mental health, patient support groups, WOC (wound, ostomy, continence) nurses, and counseling can all play an important role. In fact, Beckett was recently chatting with another radical cystectomy patient through BCAN’s Survivor to Survivor program, talking through his body image struggles. Sometimes, informal peer counseling can help people adjust, but Beckett ultimately advised him to seek professional help.

Mental health struggles are perfectly normal after a major surgery like radical cystectomy, Kava says, and the health care team is there to support patients. “We reassure them that life is not about where you pee or how you pee; it doesn’t define you in any way.”

Device issues and urinating in a new way

Tami Walker is a WOC nurse at the University of Michigan, and she sees her job as not only treating patients’ physical wounds, but also rebuilding their self-esteem. “The surgeon goes through a lot of the clinical part of it,” Walker says, “but not how to live every day.” Although Walker counsels some neobladder patients pre-operatively, she spends most of her time helping patients with their urostomies: Walker introduces them to different pouching systems; shows them how they attach to the stoma, empty out, and need to be replaced; and provides direct care for complications.

“General leakage from not having the proper fit is the biggest problem,” she says. The adhesive on urostomy pouches doesn’t always stick well to a patient’s abdomen, especially as their body contour shifts in the first eight weeks after surgery.

Months after her operation, Florida resident Nikki Saltzburg, 48, is still trying to figure out how her stoma works. Every time she changes her urostomy bag, she carries a toolbox of materials into the bathroom: an anti-adhesive aerosol to remove the old pouch, a stencil and pair of scissors to cut a hole in the new pouch, a sticky paste to attach the pouch to her stoma, and a handheld fan to dry her skin. “It still takes me a while, and the challenge is the stoma doesn’t stop leaking urine,” Saltzburg says, “so urine can be running down your stomach or spraying somewhere.”

She needs to be meticulous because leaked urine can cause rashes, lumps, and fungal infections. Other common issues include urinary tract infections, hernias where intestinal organs bulge out of the abdomen, and bowel symptoms like flatulence and diarrhea.

Although there are typically fewer devices for neobladder patients, Byfuglin, like 10% of men and up to 50% of women, has to self-catheterize her urethra to fully relieve herself. As such, Byfuglin always tries to be mindful in new places: “It’s like when you have a toddler and you just potty trained him, and you have to think ahead of time where the restroom is.” Because the neobladder is not connected to the brain, patients don’t have a typical sensation of “fullness,” rendering accidents common, especially while sleeping. Experts say pelvic floor therapy, pads, and nighttime drainage bags can help address such incontinence.

It takes on average three months, Walker says, for patients to become comfortable with urinating in a new way. Beckett has been living with urostomy for almost a decade now, and initially, he used to have accidents three to four times a month. Now, he can go six weeks without one. For him, the difference was finding the right device system that works for his body. “It stays on, it doesn’t leak, and it’s lightweight,” Beckett says.

Read More: Changing Cancer Care, So Patients No Longer Feel Like a Number

From physical activity to working to traveling to intimacy, radical cystectomy can disrupt a person’s life, at least in the short term.

Saltzburg, who has been paraplegic since infancy, used to compete on the U.S. national wheelchair tennis team. She would love to go back to playing recreationally but is “scared to right now.” Beyond feeling weak, Saltzburg’s tennis chair strap goes across her abdomen and could put pressure on her stoma.

Walker emphasizes that, while patients initially feel like they can’t return to their day-to-day activities, they can eventually do almost everything they used to. One of her patients worried that a urostomy would end his Lake Michigan boating adventures, but he’s now back on the water, active as ever. Another BCAN volunteer, Robert Schreiber, 69, flew from Massachusetts to Oregon three months after his radical cystectomy to see the solar eclipse. As Beckett says, “There’s nothing you can’t do unless you’re afraid to do it.”

One of the best ways to adjust to life with radical cystectomy, according to Walker, is to be prepared. When traveling, it’s important to bring plnety of easily accesible supplies, she says, because patients need to have their urostomy pouches, catheters, and other critical supplies within reach. “Bring double what you normally would need.”

For everyday outings, it can also be a good idea to carry a bag of supplies. Byfuglin learned that the hard way when she stepped out for a few hours, leaving all her catheters behind as a fire broke out in Ventura County, California. “I couldn’t get home,” Byfuglin says. “It was the biggest panic of my life!” Her advice for other radical cystectomy patients? “You have to plan ahead.”

Of course, despite all the planning and optimism, the path to normalcy is far from linear. It took eight months for Byfuglin to return to work, but she was almost immediately laid off because “they felt like I couldn’t do my job anymore.” For many patients with bladder cancer, there’s also a constant veil of fear that their tumor will come back. “You have to give yourself grace to not be okay,” Byfuglin says. “I just keep using the word ‘living.’ At least I’m here.”