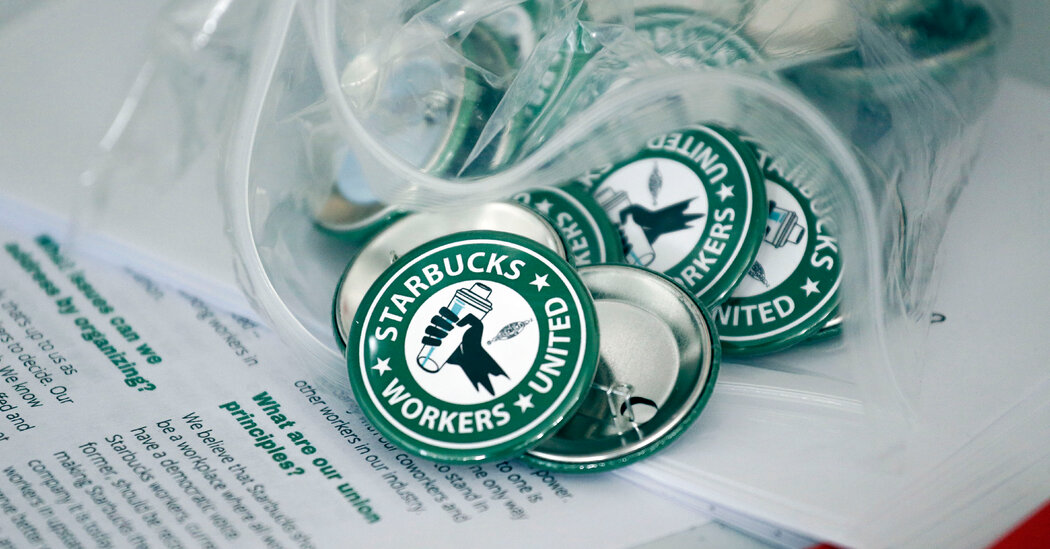 As the union drive at Starbucks stores accelerates, Starbucks has ratcheted up its efforts to push back on the campaign, asking on Monday that the National Labor Relations Board investigate allegations of misconduct during a union vote in the Kansas City area.

The union described the letter as part of the company’s strategy to obstruct elections, as the union’s campaign has picked up force with more than 200 victories secured out of more than 250 elections.

“Starbucks is simultaneously claiming to stand for voter protections, and then asking that all elections be suspended nationwide,” said Michelle Eisen, a barista at the Elmwood location in Buffalo, N.Y., the first unionized company-owned store. “This is hypocrisy at its finest.”

In the letter on Monday, Starbucks defended the move. “Starbucks respects the rights of its partners to decide for themselves whether they wish to be represented by a union,” the company’s lawyers wrote. “But those rights can only be properly exercised — and realized — through a neutral, honest process.”

Starbucks has filed numerous complaints about procedural issues in various individual locations, said John Logan, a labor professor at San Francisco State University. He said that the efforts by Starbucks have forced labor board officials to spend their time and resources investigating complaints, some of which have been found to be lacking in substance.

“So often, with Starbucks, the complaint, or the appeal, is the point,” said Mr. Logan.

He said that the company had ascribed bias to procedural issues that are typical of a sweeping election run. “When there’s hundreds of elections going on — they’ve conducted well over 250 elections and over 300 petitions — people can make mistakes without the intentions of swinging the election to the union or against the union,” he said.

Tensions between union leaders and the company have heightened in recent weeks. Workers have held more than 55 strikes in at least 17 states. Starting on Monday, for example, six stores in Eugene, Ore., went on strike.

The N.L.R.B. is investigating Starbucks for various allegations of misconduct, including closing stores where workers had filed for union elections and firing union leaders and pro-union workers, which the company has denied.

The company faces more than 200 charges of unfair labor practices across 28 states, which Mr. Logan said was an unusually high number for a union drive that has lasted less than a year. A labor dispute between Caterpillar and the United Automobile Workers union, for example, lasted more than six years and generated hundreds of allegations of unfair practices.

Responding to the letter from Starbucks on Monday, the N.L.R.B. said it could not comment on the specifics of its open cases.

“The regional staff — and, ultimately, the board — will carefully and objectively consider any challenges raised through these established channels, which include opportunities to seek expedited review in both representation and unfair labor practice cases,” said Kayla Blado, a spokeswoman for the labor board.