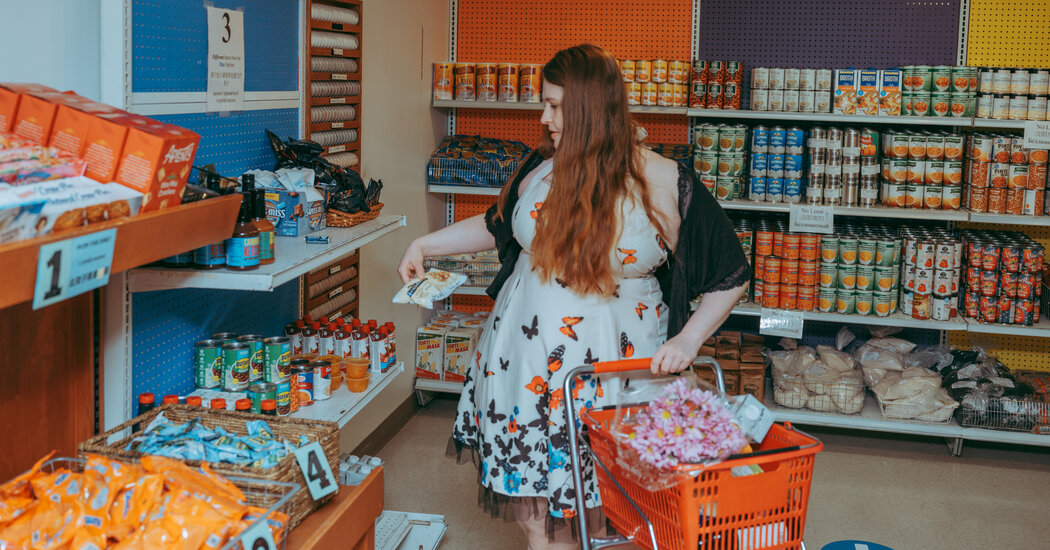 PORTLAND, Ore. — For the better part of last year, the pandemic eased its grip on Oregon’s economy. Awash in federal assistance, including direct checks to individuals and parents, many of the state’s most vulnerable found it easier to afford food, housing and other daily staples.

Most of that aid, which was designed to be a temporary bridge, has run out at a particularly bad moment. Oregon, like states across the nation, has seen its economy improve, but prices for everything from eggs to gas to rent have spiked. Demand is growing at food banks like William Temple House in Northwest Portland, where the line for necessities like bread, vegetables and toilet paper stretched two dozen people deep on a recent day.

“I’m very worried, like I was in the first month of the pandemic, that we will run out of food,” said Susannah Morgan, who runs the Oregon Food Bank, which helps supply William Temple House and 1,400 other meal assistance sites.

In March 2021, President Biden signed into law a $1.9 trillion aid package aimed at helping people stay afloat when the economy was still reeling from the coronavirus. In addition to direct checks, the package included rental assistance and other measures meant to prevent evictions. It ensured free school lunches and offered expanded food assistance through several programs.

Those programs helped the U.S. economy recover far more quickly than many economists had expected, but they have run their course as prices soar at the fastest pace in 40 years. The Federal Reserve, in an attempt to tame inflation, is rapidly raising borrowing costs, slowing the economy’s growth and stoking fears of a recession. While the labor market remains remarkably strong, the Fed’s interest rate increases risk slamming the brakes on the economy and pushing millions of people out of work, which would hurt lower-wage workers and risk adding to evictions and food insecurity.

Several factors have driven prices higher in the last year, including a shift in spending toward goods like couches and cars and away from services. Supply chain snarls, a buying frenzy in the housing market and an oil price spike surrounding the Russian invasion of Ukraine have also contributed. While gas prices have fallen in recent months, rent continues to rise, and food and other staples remain elevated.

Another factor fueling inflation, at least in small part, is the stimulus spending that helped speed the economy’s recovery and keep people out of poverty. More money in people’s bank accounts translated into more consumer spending.

While the extent to which the rescue package fed inflation remains a matter of disagreement, almost no one, in Washington or on the front lines of helping vulnerable people across the country, expects another round of federal aid even if the economy tips into a recession. Lawmakers have grown increasingly concerned that more stimulus could exacerbate rising prices.

In the meantime, the progress that the Biden administration hailed in fighting poverty last year has faded. The national child poverty rate and the food hardship rate for families with children, which dipped in 2021, have both rebounded to their highest levels since December 2020, according to researchers at Columbia University’s Center on Poverty and Social Policy. Two in five Americans surveyed by the Census Bureau at the end of July said they had difficulty paying a usual household expense in the previous week, the highest rate in two years of the survey.

What is happening at the William Temple House is emblematic of the economic situation. Demand for food is swelling again, and officials here blame rising prices and lost federal aid. The people seeking help come from a wide variety of backgrounds: parents, retirees struggling to stretch Social Security benefits, immigrants who speak Mandarin, college graduates with jobs.

What is inflation? Inflation is a loss of purchasing power over time, meaning your dollar will not go as far tomorrow as it did today. It is typically expressed as the annual change in prices for everyday goods and services such as food, furniture, apparel, transportation and toys.

What causes inflation? It can be the result of rising consumer demand. But inflation can also rise and fall based on developments that have little to do with economic conditions, such as limited oil production and supply chain problems.

Is inflation bad? It depends on the circumstances. Fast price increases spell trouble, but moderate price gains can lead to higher wages and job growth.

Waiting in line on a recent Wednesday, Susan B. Smith said federal aid had helped her family endure the pandemic over the last year. Direct payments, along with three months’ worth of rental assistance, “got us through a lot last winter,” she said. “Every little bit of help, we appreciate it. We just want to make it through, not starve.”

Now, most of that assistance is gone, and food and housing cost more, a reality that has forced Ms. Smith and one of her daughters, Tamela Clover, to seek help at the food pantry. Ms. Clover, a college graduate who works part time for a social services agency, said her salary had not kept pace with her cost of living: “Everything’s so expensive.”

Mr. Biden frequently acknowledges the high inflation is hurting people and has taken several steps to try to mitigate rising costs. He and his aides insist that while the pain is real, last year’s stimulus package has made the country and its most vulnerable people better positioned for any economic troubles ahead.

Administration officials point to a stronger job market, a lower eviction rate and healthier household finances than the nation has typically experienced at this point in a recovery from a recession, which the economy briefly entered early in the pandemic. They say the $350 billion that Congress gave to state, local and tribal governments should help fuel some assistance programs even after federal aid runs out.

The law “reduced significantly the degree of hardship, both over the last year and a half and going forward,” said Gene Sperling, a senior adviser to Mr. Biden who has overseen fulfillment of the law.

But the president was forced to drop his push to extend many of the temporary programs that Democrats approved last year to directly fight hunger and poverty. That included additional food from the Agriculture Department, rental assistance from the Treasury, and supplemental income in the form of direct payments and an expanded child tax credit. An extension of the child credit was included in a bill carrying a much larger portion of Mr. Biden’s agenda that the House passed in November, but it did not survive in the Senate. An earlier Biden proposal had also contained $150 billion in affordable-housing programs, which were also jettisoned.

The swift decline into pandemic recession plunged millions of Americans into dire financial straits. In 2020, the Oregon Food Bank served 1.7 million people, Ms. Morgan said. That number dipped in 2021 to about 1.2 million.

Now it’s rising again, toward what Ms. Morgan estimates could be 1.5 million. That would be the food bank’s second-largest caseload for a single year, behind only 2020.

“There’s a very direct correlation between federal assistance, state assistance and a decrease in numbers,” said Kevin Ryan, the director of social services at William Temple House, who welcomed Ms. Smith, Ms. Clover and others to a shaded sitting area where they waited for their trip into the food pantry to begin.

Understand Inflation and How It Affects You

“When that goes away, the numbers go back up.”

When Mr. Biden’s team drafted the rescue plan in the early days of his administration, it was trying to give vulnerable Americans, particularly those thrown out of work or at risk of losing their homes, enough assistance to carry them through until the economy returned to some version of normal.

The economic recovery has been faster than was forecast before Democrats approved the $1.9 trillion package, with unemployment hovering near a 50-year low and growth surging last year. “It gave millions of working families a shot they otherwise might not have,” said Brian Deese, the director of Mr. Biden’s National Economic Council.

But the normalcy has yet to arrive. Inflation has climbed higher, and endured longer, than administration officials thought possible.

Higher prices are making it harder for many Americans to afford food and housing. Adjusted for inflation, average wages have declined since Mr. Biden took office. Economic data suggest that many households, including a wide swath of vulnerable Americans, have lost buying power as prices have soared.

Rising mortgage rates, the result of Fed interest rates meant to combat price spikes, have pushed home buying even further out of reach for millions of Americans. The Oregon Office of Economic Analysis estimates that only 23 percent of Portland residents can now afford to buy a median-priced home in the city, down from 35 percent in December.

Poverty researchers say the coming months could be worse.

“There’s strong reason to believe that food insufficiency will continue to remain at high levels and perhaps worsen,” said Zachary Parolin, a poverty researcher at Bocconi University in Milan and a senior fellow at Columbia’s Center on Poverty and Social Policy.

Administration officials say the best policies they can pursue for people like Ms. Smith are ones that fight inflation, such as actions to untangle supply chains that have pushed up the prices of goods like furniture. The bill that Mr. Biden signed this month will eventually reduce prescription and electricity costs for many Americans, and it could help lower overall inflation by a small amount in the long term, independent studies suggest.

Ms. Smith, 55, is not expecting another round of assistance checks from the federal government and is instead relying on Social Security benefits, along with government and charitable assistance. She cares for three grandchildren, including one with a severe medical condition, and cannot work outside the home because child care would be too costly.

When her turn arrived at William Temple House, Ms. Smith carefully pulled her shopping baskets down a small flight of stairs to what resembled a miniature grocery store. “My kids are hungry,” she told Mr. Ryan, and she proceeded to stock three red crates with items she knew they’d like: potatoes, celery, bacon, Froot Loops, Ritz crackers, bags of potato chips.