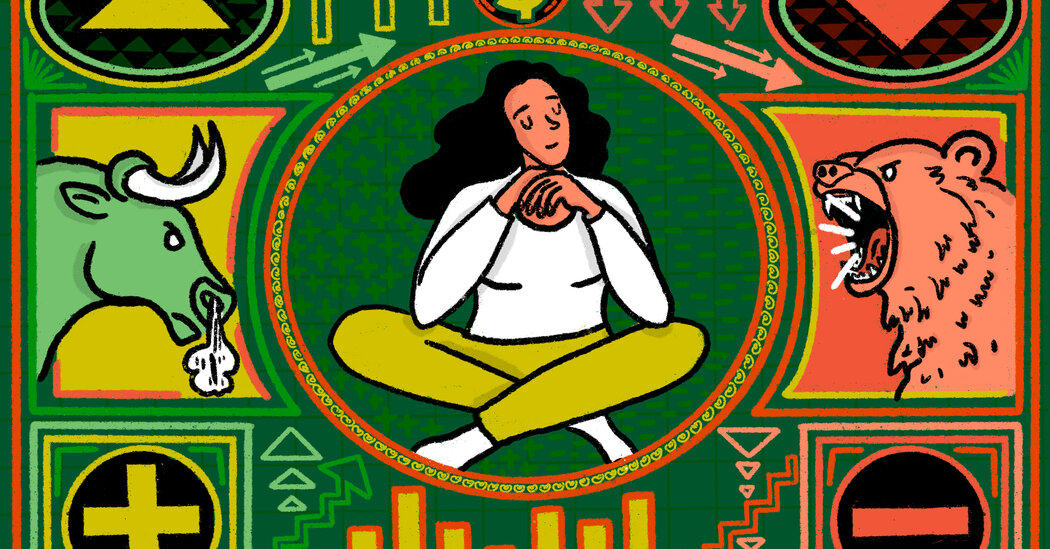 The stock market fell so sharply at the beginning of the year that it felt at times as if it would never come back.

But it did, in a weekslong rally that lasted through mid-August and would have been more widely celebrated if stocks had not plummeted so badly in the first place.

Now, for the last week or two, the market has been wobbly, with no clear trend in sight.

What should investors do about these head-spinning changes in the market’s direction?

In a word: nothing.

Ignoring the shifts in the markets was my main advice for long-term investors throughout the winter, when stocks were cratering. And I’m sticking with it.

As it turns out, doing nothing was the second-best advice anyone could have given you for investing in the overall stock market this year.

The very best advice would have required a crystal ball: You should have sold precisely on Jan. 3, when the S&P 500 stock index was at its peak, and bought on June 16, when it hit bottom. (Then, quite possibly, you should have sold again on Aug. 16, before the market turned rocky. The verdict is still out on that one.)

If you made all of those moves, more power to you. Please get in touch and explain how you managed that perfect trick of market timing, and how you’re going to pull it off the next time.

For most of us, buying and selling at the right moment isn’t going to happen regularly enough to beat the market.

Instead, this year shows why it’s better, for the vast majority of people, to take a longer-term approach. Once you have set up a solid investing plan, using low-cost index funds for steady purchases of stocks and bonds, you can do absolutely nothing.

A sharp decline, and then …

Let’s recap what has happened this year.

The stock market was terrible for months. In fact, through June, it was the worst first half of a year since 1970, as this newspaper, and many others, stated.

Our Coverage of the Investment World

The decline of the stock and bond markets this year has been painful, and it remains difficult to predict what is in store for the future.

High inflation, war, rising interest rates and the threat of recession contributed to the dismal performance, and rising rates meant that prices in the bond market (which move in the opposite direction) fell, too.

But the handy periodization used by both Wall Street and journalism — focusing on the first half of the year — obscured a major shift in the stock market.

Yes, for more than five months from the market’s peak on Jan. 3, the trend was unmistakably downward. After June 16, however, the market turned around, though of course it wasn’t immediately clear that it was happening.

The big declines got everyone’s attention.

What didn’t get nearly as much attention was the move that began on June 17. Stocks started climbing — and kept doing so for two months. From its bottom through Aug. 16, the S&P 500 gained 17.4 percent; with dividends, it returned 17.7 percent. That’s a whopping two-month return.

It would be an exaggeration to claim that nobody noticed. But it’s fair to say the market’s rise wasn’t chronicled nearly as widely as its fall. Many investors may not have even realized that stocks were steadily rising.

One reason for this is entirely sensible: The math is unpleasant. When the market’s value declines by nearly a quarter, it must increase much more than that — by 31 percent, in this case — to return to its former level. The 17.4 percent climb left stocks well below their peak. You still lost money, just not as much.

Another reason for the relative neglect is that the S&P 500 is still in a bear market.

Customarily, a bear market continues until the last peak of the previous bull market has been recaptured. You won’t see headlines about a new bull market until the S&P 500 reaches its June 3 peak, which, according to Howard Silverblatt, senior index analyst for S&P Dow Jones Indices, was 4,796.56. As of Thursday’s close, the index stood at 4,199.12.

So if you don’t follow the markets closely, it is understandable if you didn’t notice that the 17.4 percent rally ever happened.

In a manner of speaking, you didn’t miss much. The uncertainty in the stock market and, more important, in the greater economy has not ended. Not at all.

The Federal Reserve says it intends to keep raising short-term interest rates to stave off raging inflation For now, that seems to me to be the right approach, despite the problems that higher interest rates will cause businesses and working people, who may lose jobs if the Fed persists and the economy contracts.

Inflation may have already peaked. Gasoline is under $4 a gallon in the New York area, where I live, for the first time since March, and that kind of good news is being experienced by drivers all over the country.

But at an annual rate of 8.5 percent, the latest reading for the Consumer Price Index, inflation is far too high for the Fed to accept. Therefore, the only rational explanation for a sudden Fed pause would be very unwelcome, such as an unforeseen calamity that posed a grave threat to the financial system. No one wants that.

The best we can hope for is a so-called soft landing, an easy decline in inflation accomplished with just a modest further increase in interest rates without a major recession or a far deeper bear market. Perhaps that’s possible in this odd economy, which is distorted by the pandemic and the war. Or perhaps it’s not.

I am not making predictions.

What I’m saying is that it’s possible to cope — and to invest well — without knowing where the markets or the economy will be next week or next month.

When the market drops, as it did early this year, it paid not to panic. If you had sold during the decline you would have missed the substantial gains of June, July and August. It was much easier to have remained calm while losing money in the stock market.

Please note one supremely important caveat: You had to have put aside enough money to pay your bills. If you have not done that, you will be taking a big risk by investing in the stock market.

Then set up an investing plan with a horizon of a decade or more, relying mainly on low-cost index funds that track the entire market.

I invest in the bond market, too, in the hope of finding greater stability, because the actuarial tables insist that I’m closer to retirement than to the start of my career, and I may need some of the money within the next decade or two.

If you’re just starting out, though, it’s reasonable to focus on stocks and avoid bonds.

Yes, you can do even better than my buy-and-hold, total market approach, if you pick the right stocks at the right moment, and if you sell them at the right time. But you would need to be quite knowledgeable or lucky or, better yet, both. With the method I’m recommending, you don’t need to be right about much. You’re just betting that the economy will grow over the long run and that the stock market will capture some of that growth.

Follow my lead and you can disregard the market’s short-term vagaries. Keep putting money into your index funds, especially when the market falls, and you will benefit from lower prices and bolster the overall returns that you will earn over decades.

If you set things up right, your investing will require that you do nothing further except, perhaps, rebalance your holdings every so often to make sure you have the proportion of stocks and bonds that you really want.

I’ll come back with more on that subject in the weeks ahead.

As for quick, short-term maneuvering, that may be fun, but I’d stay away from it in the stock market. Slow and steady makes better sense for the money you will really need.