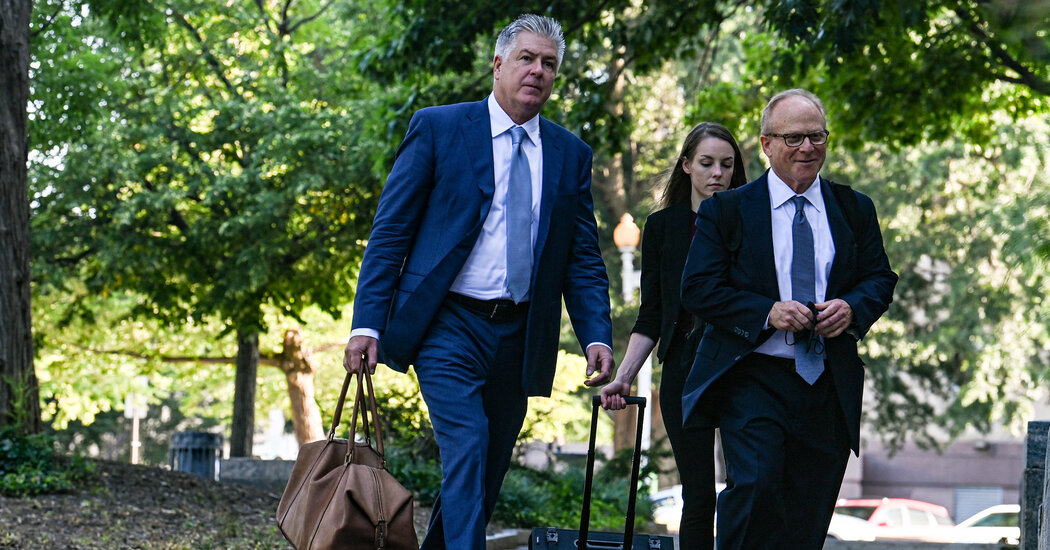 On May 25, one of former President Donald J. Trump’s lawyers sent a letter to a top Justice Department official, laying out the argument that his client had done nothing illegal by holding onto a trove of government materials when he left the White House.

The letter, from M. Evan Corcoran, a former federal prosecutor, represented Mr. Trump’s initial defense against the investigation into the presence of highly classified documents in unsecured locations at his members-only club and residence, Mar-a-Lago. It amounted to a three-page hodgepodge of contested legal theories, including Mr. Corcoran’s assertion that Mr. Trump possessed a nearly boundless right as president to declassify materials and an argument that one law governing the handling of classified documents does not apply to a president.

Mr. Corcoran asked the Justice Department to present the letter as “exculpatory” information to the grand jury investigating the case.

Government lawyers found it deeply puzzling. They included it in the affidavit submitted to a federal magistrate in Florida in their request for the search warrant they later used to recover even more classified materials at Mar-a-Lago — to demonstrate their willingness to acknowledge Mr. Corcoran’s arguments, a person with knowledge of the decision said.

As the partial release of the search warrant affidavit on Friday, including the May 25 letter, illustrated, Mr. Trump is going into the battle over the documents with a hastily assembled team. The lawyers have offered up a variety of arguments on his behalf that have yet to do much to fend off a Justice Department that has adopted a determined, focused and so far largely successful legal approach.

“He needs a quarterback who’s a real lawyer,” said David I. Schoen, a lawyer who defended Mr. Trump in his second Senate impeachment trial. Mr. Schoen called it “an honor” to represent Mr. Trump, but said it was problematic to keep lawyers “rotating in and out.”

Often tinged with Mr. Trump’s own bombast and sometimes conflating his powers as president with his role as a private citizen, the legal arguments put forth by his team sometimes strike lawyers not involved in the case as more about setting a political narrative than about dealing with the possibility of a federal prosecution.

“There seems to be a huge disconnect between what’s actually happening — a real live court case surrounding a real live investigation — and what they’re actually doing, which is treating it like they’ve treated everything else, recklessly and thoughtlessly,” Chuck Rosenberg, a former U.S. attorney and F.B.I. official, said of Mr. Trump’s approach. “And for an average defendant on an average case, that would be a disaster.”

Mr. Trump’s team has had a few small procedural wins. On Saturday, a federal judge in Florida signaled that she was inclined to support Mr. Trump’s request for a special master to review the material seized by the government in the search of Mar-a-Lago on Aug. 8.

It is not clear how much the appointment of a special master would slow or complicate the government’s review of the material. Mr. Trump’s team has suggested that it would be a first step toward challenging the validity of the search warrant; but it also gives the Justice Department, which is expected to respond this week, an opportunity to air new details in public through their legal filings.

The release on Aug. 26 of a partly redacted affidavit used by the Justice Department to justify its search of former President Donald J. Trump’s Florida residence included information that provides greater insight into the ongoing investigation into how he handled documents he took with him from the White House. Here are the key takeaways:

The government tried to retrieve the documents for more than a year. The affidavit showed that the National Archives asked Mr. Trump as early as May 2021 for files that needed to be returned. In January, the agency was able to collect 15 boxes of documents. The affidavit included a letter from May 2022 showing that Trump’s lawyers knew that he might be in possession of classified materials and that the Justice Department was investigating the matter.

The material included highly classified documents. The F.B.I. said it had examined the 15 boxes Mr. Trump had returned to the National Archives in January and that all but one of them contained documents that were marked classified. The markings suggested that some documents could compromise human intelligence sources and that others were related to foreign intercepts collected under the Foreign Intelligence Surveillance Act.

Prosecutors are concerned about obstruction and witness intimidation. To obtain the search warrant, the Justice Department had to lay out possible crimes to a judge, and obstruction of justice was among them. In a supporting document, the Justice Department said it had “well-founded concerns that steps may be taken to frustrate or otherwise interfere with this investigation if facts in the affidavit were prematurely disclosed.”

Some of the Trump lawyers’ efforts have also appeared ineffective or misdirected. Mr. Corcoran, in his May 25 letter, made much of Mr. Trump’s powers to declassify material as president, and cited a specific law on the handling of classified material that he said did not apply to a president. The search warrant, however, said federal agents would be seeking evidence of three potential crimes, none of which relied on the classification status of the documents found at Mar-a-Lago; the law on the handling of classified material cited by Mr. Corcoran in the letter was not among them.

Two lawyers who are working with Mr. Trump on the documents case — Mr. Corcoran and Jim Trusty — have prosecutorial experience with the federal government. But the team was put together quickly.

Mr. Trusty was hired after Mr. Trump saw him on television, people close to the former president have said. Mr. Corcoran came in during the spring, introduced by another Trump adviser during a conference call in which Mr. Corcoran made clear he was willing to take on a case that many of Mr. Trump’s other advisers were seeking to avoid, people briefed on the discussion said.

Mr. Trump’s allies have reached out to several other lawyers, but have repeatedly been turned down.

Mr. Corcoran in particular has raised eyebrows within the Justice Department for his statements to federal officials during the documents investigation. People briefed on the investigation say officials are uncertain whether Mr. Corcoran was intentionally evasive, or simply unaware of all the material still kept at Mar-a-Lago and found during the Aug. 8 search by the F.B.I.

Mr. Corcoran did not respond to a request for comment. Taylor Budowich, a spokesman for Mr. Trump, said only that Mr. Trump and his legal team “continue to assert his rights and expose the Biden administration’s misuse of the Presidential Records Act, which governs all pertinent facts, has been complied with and has no enforcement mechanism.”

Even before Mr. Corcoran joined the team, Mr. Trump’s legal filings in various cases read like campaign rally speeches that he had dictated to his lawyers. The former president has a history of approaching legal proceedings as if they are political conflicts, in which his best defense is the 74 million people who voted for him in the 2020 election.

The closest thing to a legal quarterback in Mr. Trump’s orbit is Boris Epshteyn, a onetime lawyer at the firm Milbank who was a political adviser to Mr. Trump in 2016, ultimately becoming a senior staff member on his inaugural effort and then a strategic adviser on the 2020 campaign.

Mr. Epshteyn has championed Mr. Trump’s claims, dismissed by dozens of courts, that the election was stolen from him, and has risen to a role he has described to colleagues as an “in-house counsel,” helping to assemble Mr. Trump’s current legal team.

Mr. Trump’s advisers continue to insist that he was cooperating before the search in returning the documents. They have also suggested that they were quick to respond to Justice Department concerns, citing what they described as a request in June that a stronger lock be placed on the door leading to the storage area where several boxes of presidential records had been kept.

Yet the unsealed affidavit showed a portion of a letter from a Justice Department lawyer sent to Mr. Trump’s lawyers that did not specify anything about a lock and read less like a request than a warning.

The classified documents taken from the White House “have not been handled in an appropriate manner or stored in an appropriate location,” the letter read. “Accordingly, we ask that the room at Mar-a-Lago where the documents had been stored be secured and that all of the boxes that were moved from the White House to Mar-a-Lago (along with any other items in that room) be preserved in that room in their current condition until further notice.”

During the Aug. 8 search, the F.B.I. found additional documents in that area and also on the floor of a closet in Mr. Trump’s office, people briefed on the matter said.

Mr. Trump and a small circle within his group of current advisers maintain that he was entitled to keep documents he took from the White House, or that he had already declassified them, or that they were packed up and moved by the General Services Administration — an assertion flatly denied by that federal agency.

Mr. Trump, people familiar with his thinking say, sees the attorney general, Merrick B. Garland, not as the federal government’s chief law enforcement officer, but merely as a political foe and someone with whom he can haggle with about how much anger exists over the situation.

Shortly before Mr. Garland announced that he was seeking to unseal the search warrant, an intermediary for Mr. Trump reached out to a Justice Department official to pass along a message that the former president wanted to negotiate, as if he were still a New York developer.

The message Mr. Trump wanted conveyed, according to a person familiar with the exchange, was: “The country is on fire. What can I do to reduce the heat?”

A Justice Department spokesman would not say if the message ever made it up to Mr. Garland; but the senior leadership was befuddled by the message, and had no idea what Mr. Trump was trying to accomplish, according to an official.