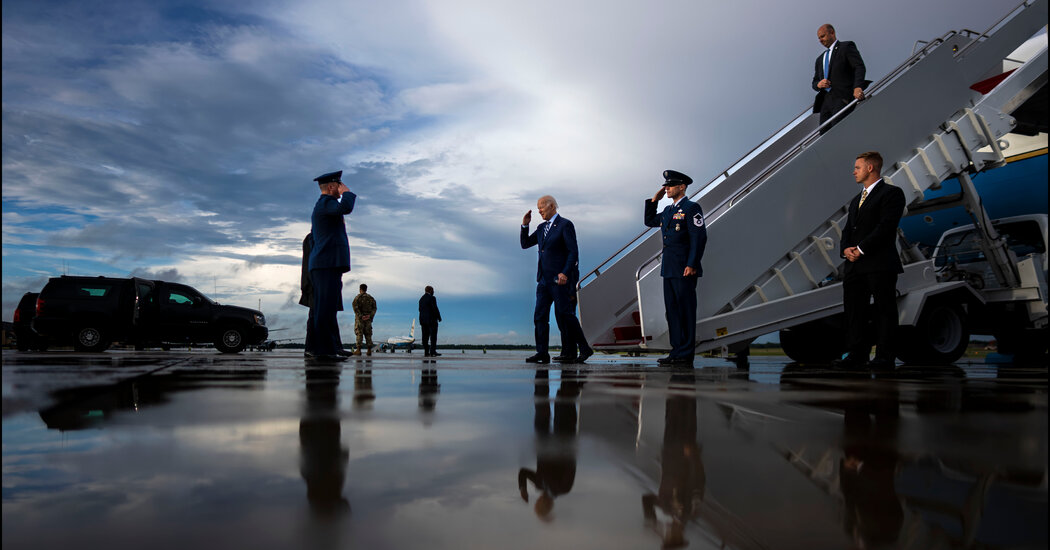 WASHINGTON — President Biden likes to say there is nothing America cannot do if the country is united and its rival parties are willing to work together.

But with just two months until the midterm elections, Mr. Biden is purposely spending less time hailing the virtues of compromise and more time calling out dangers to democracy — using some of the sharpest and most combative language of his presidency.

He has accused Republicans of embracing “semi-fascism” by paying fealty to former President Donald J. Trump. He has blasted the party for being “full of anger, violence, hate and division.” And he has warned that the danger from Republicans loyal to Mr. Trump went far beyond differences in policy.

“They’re a threat to our very democracy,” he said of a party that he has spent a half-century working with to find common ground. “They refuse to accept the will of the people. They embrace political violence.”

After weeks of internal White House strategy sessions, the president and his aides have devised a confrontational election-season approach that focuses on Mr. Biden’s accomplishments coupled with an aggressive political assault on the G.O.P., including the poll-tested phrase he began using this spring: “ultra-MAGA Republicans.”

Now, with Mr. Trump once again at the center of a criminal investigation, this time over his handling of classified documents, Mr. Biden has seized the moment to press a case that voters cannot risk a return to a party in the thrall of the former president.

As the campaign season becomes more intense, Mr. Biden plans to deliver a prime-time speech on Thursday in Philadelphia in which aides say he will argue that Americans are in the grips of a “battle for the soul of the nation,” returning to a theme he has often used to describe his motivation for becoming a presidential candidate. Recent events have made the speech more urgent for the president, but a Democratic official said Mr. Biden had been thinking of delivering the address since early summer.

“After a successful past couple of months, the president and Democrats have effectively turned this midterm into a choice, when it’s typically a referendum on the party in the White House,” said Stephanie Cutter, a veteran Democratic strategist. “The president now is articulating that choice, pretty damned well and at just the right time.”

She added, “The choice couldn’t be clearer — a reminder of what people rejected just two years ago.”

The speech will also be an opportunity for Mr. Biden to focus on falling gas prices, a booming job market and legislative victories on climate change, drug prices, infrastructure improvements and veterans’ health care.

But Mr. Biden is leaning into more political attacks, aides and allies said, in part because of what he sees as a growing embrace of violent political speech by Republicans and a threat to the democratic process of governing. The aides said he was dismayed by the number of Trump-backed election deniers who have won Republican primaries for governor or secretary of state across the country.

Mr. Biden, whose own approval ratings have begun to improve slightly since lows earlier this summer, is hoping that his party can maintain control of Congress and deliver a forceful rebuke to Mr. Trump and his followers.

It is a moment, one adviser said, to make sure people understand what is at stake.

“Given everything that is happening right now, I have to imagine that this is weighing on him very heavily,” said Symone D. Sanders, who served as the chief spokeswoman for Vice President Kamala Harris and now hosts a new MSNBC show. “He feels as though he needs to ring the alarm, sound the alarm as he did throughout all of 2019, throughout all of 2020 in the lead-up to the election.”

Republicans have noticed the new tone. Ronna McDaniel, the chairwoman of the Republican National Committee, said on Wednesday that the president was “the divider in chief and epitomizes the current state of the Democrat Party: one of divisiveness, disgust and hostility toward half the country.”

Mr. Trump is scheduled to hold a rally in Wilkes-Barre, Pa., on Saturday, just two days after Mr. Biden’s planned speech in Philadelphia and four days after the president made his own visit to Wilkes-Barre. Pennsylvania, a swing state, is home to key races for the House and Senate as well as a closely watched governor’s race.

Mr. Biden and his aides have for weeks refused to comment on the F.B.I.’s search of Mr. Trump’s Mar-a-Lago estate or the Justice Department investigation into whether the former president broke the law by taking highly sensitive documents when he left the White House. But aides said Mr. Biden was particularly outraged by the attempted breach of an F.B.I. office in Cincinnati and other threats to federal agents by those who say they support Mr. Trump.

“He and congressional Democrats are standing up for middle-class families and mainstream American values, while ultra-MAGA congressional Republicans are siding with extremism,” said Andrew Bates, a White House spokesman.

The president has gone after Republicans before. In a speech on the first anniversary of the Jan. 6, 2021, attack on the Capitol, Mr. Biden vowed to “stand in this breach” and to defend the nation against the violent followers of the former president. He pledged that he would allow “no one to place a dagger at the throat of our democracy.”

In a voting rights speech a few days later, Mr. Biden drew scorn from Republicans when he asked whether they wanted to “be on the side of John Lewis or Bull Connor,” comparing Republican lawmakers to the segregationist commissioner of public safety in Birmingham, Ala., during the civil rights era.

But in the months that followed, Mr. Biden largely retreated from that kind of language. He focused attention on global crises like the war in Ukraine and congressional efforts to enact parts of his agenda aimed at slowing climate change, lowering drug prices, aiding veterans and competing with China.

Direct political combat with his predecessor and Republicans has mostly taken a back seat — until now.

At a rally in Maryland last week, Mr. Biden posed a challenge to Americans, saying that “in this moment, those of you who love this country — Democrats, independents, mainstream Republicans — we must be stronger, more determined and more committed to saving America than the MAGA Republicans are to destroying America.”

For the White House, Mr. Biden’s amped-up language is one half of a tricky balancing act. Fresh off a series of legislative successes, the president is determined to use the next two months to remind voters about the promises he made good on. At the same time, Mr. Biden wants to keep voters focused squarely on Republicans and their agenda.

Mr. Bates, the White House spokesman, said the goal was to do both at the same time.

“We’ve empowered Medicare to negotiate lower drug prices, but they want to put Medicare and Social Security on the chopping block,” he said. “We’re standing up for women’s fundamental rights while they push a national abortion ban. We’re fighting to protect communities from gun crime with an assault weapons ban while they side with the gun lobby and propose defunding the F.B.I.”

Some of Mr. Biden’s allies said they were pleased that the president was continuing to press his case against Mr. Trump and his followers, as he did on Tuesday during his visit to Wilkes-Barre.

The president lashed out at a one-time friend and colleague, Senator Lindsey Graham, Republican of South Carolina, who had ominously warned that a prosecution of Mr. Trump over his handling of classified documents would lead to “riots in the streets.”

“The idea you turn on a television and see senior senators and congressmen saying, ‘If such and such happens, there’ll be blood in the street,’” Mr. Biden said. “Where the hell are we?”