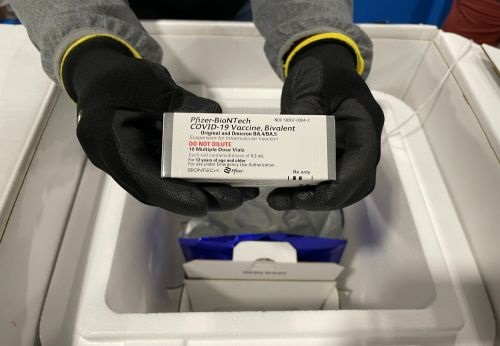 In two votes, each 13-1, the immunization committee of the U.S. Centers for Disease Control and Prevention (CDC) recommended that Americans receive an Omicron-specific booster dose of the COVID-19 vaccine. Following a day-long discussion of the available data on Sept. 1, the panel recommended boosters from two manufacturers—Pfizer-BioNTech and Moderna, both of whom make mRNA-based vaccines; the new booster made by Pfizer-BioNTech is for people 12 years and older, and the Moderna shot is for adults 18 years and older. The group also advised that people wait until at least two months after their previous dose before getting one of the two new booster shots. Within hours of the vote, CDC director Dr. Rochelle Walensky accepted the committee’s advice to recommend the new booster.

The Omicron boosters can “help restore protection that has waned since previous vaccination and were designed to provide broader protection against newer variants,” she said in a statement announcing her decision. “This recommendation followed a comprehensive scientific evaluation and robust scientific discussion. If you are eligible, there is no bad time to get your COVID-19 booster and I strongly encourage you to receive it.”

The CDC’s guidance comes a day after the U.S. Food and Drug Administration (FDA) authorized the Omicron-specific shots by both companies.

The booster is the first to target a variant of the SARS-CoV-2 virus. All vaccines that have been approved by the FDA and recommended by the CDC until this point, as well as booster doses that the agencies have authorized, targeted the original virus that emerged in 2019. The latest Omicron booster targets the BA.4 and BA.5 subvariants of the virus, which now account for nearly all new infections of COVID-19 in the U.S.

The Omicron BA.4/5 booster represents a dramatic change in the way health officials are hoping to protect the public. Rather than recommending booster doses every few months, as they’ve been advising since the vaccines became available in late 2020, they are now hoping to shift to an immunization schedule that mimics that for influenza, with an annual shot. The newly authorized Omicron booster will replace existing boosters of the original COVID-19 vaccine. All people 12 years or older will be eligible to get one, regardless of how many previous booster doses they have received so far.

In recommending the booster shot, the CDC’s panel of independent vaccine experts acknowledged that while they have authorized boosters before, this one is different in a number of ways. Not only is it the first to target a variant of the virus, it’s also the first to contain genetic material against two versions of the virus—the original, or ancestral strain, and Omicron BA.4 and BA.5, in a so-called bivalent vaccine. In the case of both Pfizer-BioNTech’s and Moderna’s booster, the dose is the same as the previous boosters that have been authorized, but split between the original and Omicron BA.4/5 strains.

Perhaps most concerning for the committee members, the boosters from both companies have not been tested yet in people, which means that there is no direct evidence that the shots will actually protect people from getting seriously sick with COVID-19. Both Pfizer-BioNTech and Moderna developed Omicron boosters after an FDA panel of experts met in June and requested that the vaccine manufacturers target the BA.4 and BA.5 subvariants. The companies had developed a booster that combined the original strain and an earlier version of Omicron, BA.1, and showed that it helped boost virus-fighting antibody levels against Omicron. But given that BA.4 and BA.5 quickly overtook BA.1 in causing infections, the FDA requested a bivalent vaccine including BA.4 and BA.5. Both companies submitted data to the FDA in August from animal studies showing that their boosters raised antibody levels in mice.

FDA and CDC scientists stress that the animal data is sufficient to recommend the newest booster, given the totality of evidence supporting the safety and effectiveness of previous versions of the vaccines so far. They point to the real-world data involving millions of people who have been vaccinated and boosted up to two times with the original vaccine, as well as data on the bivalent BA.1 booster that never made it to market. Dr. Doran Fink, deputy clinical director of the division of vaccines and related products applications at FDA, opened the discussion by telling the members that, “FDA in its authorization considered the totality of evidence, which consisted primarily of an extrapolation approach based on data from clinical trials with similar bivalent vaccine formulations consisting of the original and Omicron BA.1 sub lineage component, as well as extensive experience with the use of the original monovalent vaccine both as a primary series and as boosters. Additionally, FDA considered supportive data from some animal studies that provided additional reassurance about our extrapolation approach.”

That’s a different approach than that taken by U.K. and Canadian health authorities, who decided to authorize the bivalent booster made by Moderna against the BA.1 subvariant.

That leaves some public health experts in the U.S. concerned about recommending the Omicron BA.4/BA.5 booster. Dr. Pablo Sanchez, professor of pediatrics at Ohio State University and the lone dissenter in voting against recommending the new Omicron booster, said: “I feel we really need human data. It’s a new vaccine, a new platform, and there is a lot of vaccine hesitancy already, so we need human data. I really feel this is premature and wish we had seen that human data.”

Sanchez, however, acknowledged that he would still probably get the booster, since he was convinced by the FDA’s argument that the available evidence, even if it’s indirect, suggests the new shot is both safe and potentially effective. There’s also the fact that every year, the annual flu shot is approved without data demonstrating effectiveness against the latest influenza strains circulating, making the immunization a bit of a gamble, albeit a calculated one. “I would remind the committee that every year, we recommend influenza vaccines based on new strains without clinical studies being done,” said Dr. Melinda Wharton, from the CDC’s National Center for Immunization and Respiratory Diseases and executive secretary of the CDC commmittee. “In a lot of ways, this is analogous to that.”

In favor of recommending a change in the booster, CDC researchers documented that people immunized with the original vaccine and boosters have waning, and in some cases very little, protection from getting infected with the Omicron BA./BA.5 subvariant. While the original vaccines and boosters are protecting people from getting sick enough to need hospitalization, even that protection appears to be diminishing, as more fully immunized people are getting moderately ill after getting infected with BA.4/BA.5. Modeling presented by CDC scientists also showed that if health authorities were to wait another few months, until November, for human studies to be complete on the BA.4/5 booster, about 137,000 more people would be hospitalized and nearly 10,000 people would die of COVID-19.

That’s the reason behind the government’s push to authorize the new booster, but it’s not clear if the public will follow health officials’ advice and rush to get boosted—especially in an environment in which people are weary of repeated boosters and increasingly skeptical of their effectiveness. As more people become infected with the highly transmissible Omicron BA.4/5 variant, they believe that their immunity from having been sick trumps the need to get boosted. And some health officials aren’t convinced that BA.4/5 booster provides that much additional protection from disease compared to the original vaccine, which becomes even more questionable when it comes to people who have been immunized and boosted, and who have recently been infected with Omicron BA.4/5, as many Americans have recently. Dr. Paul Offit, a professor at Children’s Hospital of Philadelphia and a member of the FDA’s vaccine expert committee, does not feel there is enough data to support recommending the new booster, and likely won’t line up for this shot. “The authorization and recommendation by the CDC doesn’t change the data, which is uncomfortably scant,” he tells TIME. “We still have no human data on this vaccine. I don’t plan to get this vaccine, mostly because I don’t think I need it. I have had three previous doses and one mild natural infection.”

Some of the data presented to the CDC committee members addressed this question of how much incremental benefit most people, who are vaccinated and boosted, will get from the Omicron-specific booster. While it makes biological sense to match the booster shot to the circulating virus, which is currently the Omicron BA.4/5 subvariant, the studies haven’t been completed yet. The early data in animals are encouraging, suggesting that boosting with the Omicron-specific shot may help people build broader immunity to not just the original strain but also to multiple variants, including Alpha, Beta, Delta, and Omicron, but mouse data can’t substitute for human trials.

Both companies are conducting human studies and expect to have that information in a few months, but in the meantime, people will have to make their own decisions about how comfortable they are with getting the newest booster dose. “I think this is a big step forward toward simplification,” Wharton told the committee. “I hope we are moving toward something that is simpler and will not require such frequent changes going forward. Clearly we are not there yet, but I think this is a big step forward.”

The U.S. government has already purchased 170 million doses of the Omicron BA.4/5 booster from the two manufacturers, and Pfizer-BioNTech has already shipped 100,000 doses to 62 sites that arrived on Sept. 1. After the Labor Day weekend, the company expects to deliver 3 million doses to more than 3,000 sites. Moderna is manufacturing 66 million doses to meet the government’s order, but has not reported how many have been shipped so far.