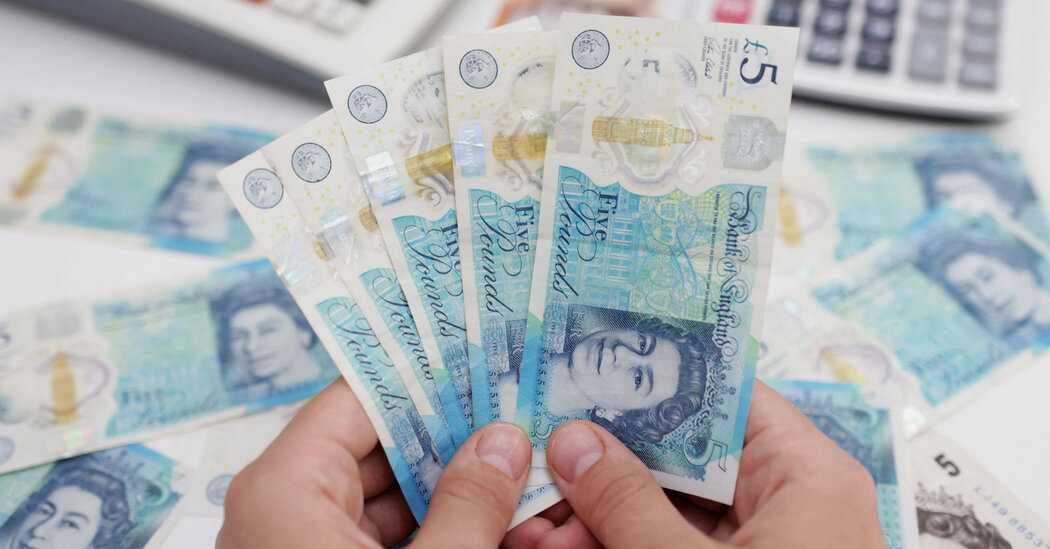 The British pound inched away from its two-and-a-half-year low against the U.S. dollar on Tuesday after media reports that the new prime minister, Liz Truss, would announce a major plan to freeze energy bills for households to ease the cost of living crisis.

The pound reached $1.16 amid reports that widespread relief was being considered, before reversing most of its gain and trading at about $1.15 by late afternoon in London. A cap on household electricity and gas bills is set to rise next month, with the average bill increasing 80 percent to 3,549 pounds, from about £2,000, or $2,317.

The pound’s small reversal comes amid a long downward trend: This year, the British currency has dropped about 15 percent against the dollar as the country’s economic outlook has worsened with rising prices restraining consumer spending, normally a key driver of economic growth. The U.S. dollar has been strong against all major currencies this year, but there have been few things working in Britain’s favor in currency markets as the country has a double-digit inflation rate and growing predictions of a recession.

Even as the pound pushed higher on Tuesday, easing the threat it would hit lows last seen in 1985, there are questions about how Ms. Truss’s government will pay for the energy relief on top of other campaign commitments to cut taxes for workers and scrap a planned increase in corporation tax. Other expensive policies have been proposed including slashing V.A.T., a type of sales tax.

Kwasi Kwarteng, tipped to be the next chancellor of the Exchequer, recently said that the scale of the energy crisis meant there would be “some fiscal loosening,” presumably meaning additional borrowing, to pay for the support measures.

But Britain’s borrowing costs have risen sharply. One measure, the yield on 10-year government debt, is approaching 3 percent, the highest since early 2014.

These funding concerns, as investors wait to see what mix of borrowing and taxation will pay for the packages, will continue to weigh on British assets, analysts said.

The simultaneous decline in the pound and government bonds is “unusual,” Kamal Sharma, a strategist at Bank of America, wrote in a note on Tuesday. It could be linked to longer-term concerns about the pound, including a widening current-account deficit and potential strains on the government’s finances from plans for more stimulus, he wrote.

“The broader move in sterling highlights how confidence has unraveled,” Mr. Sharma wrote. He expected the pound to remain weak this year.

Shreyas Gopal, a strategist at Deutsche Bank, wrote in a note on Monday that “investor confidence cannot be taken for granted” considering the uncertainty of the global economic backdrop. If confidence falls further, there could be a currency crisis in which foreign investors refuse to fund Britain’s current account deficit, he added. “Poorly targeted and large-scale fiscal stimulus” could exacerbate the deficit, a key risk for the pound, he wrote in the note.