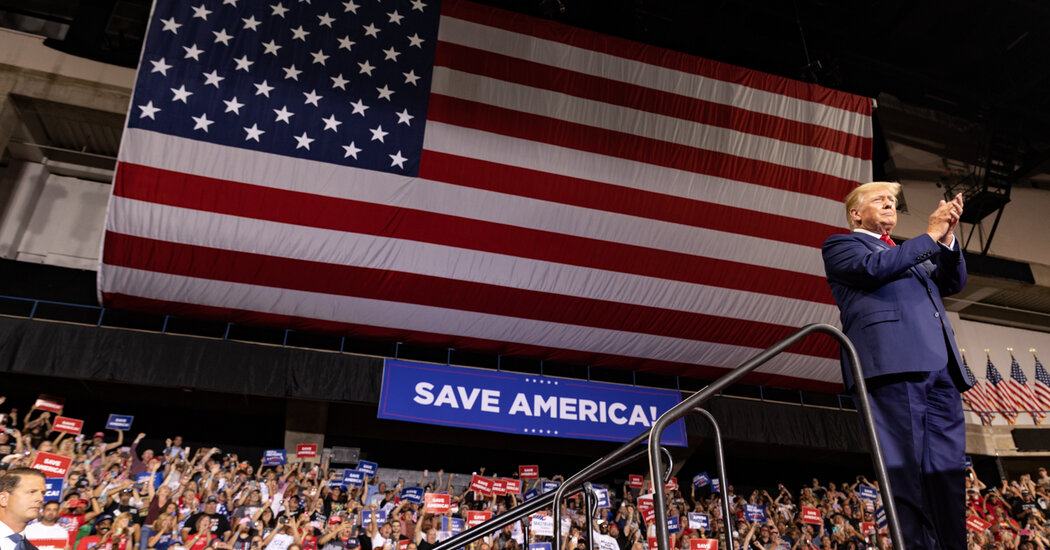 In granting Mr. Trump’s request, the judge, Aileen M. Cannon of the Southern District of Florida, gave the so-called special master expansive powers, with the authority to evaluate documents not only for those covered by attorney-client privilege, but also for those potentially protected by executive privilege.

Judge Cannon has yet to select someone for the job, and the Justice Department is still mulling whether to appeal part or all of her decision.

Here is a closer look.

What is a special master?

A person appointed by a judge to assist the court with its proceedings. A special master is selected to help with a particular matter or case, in contrast to a standing master, who is installed to help on a continuing basis. Masters can hold proceedings and then make reports and recommendations, which the judges can accept or reject.

Why are special masters appointed?

There are various reasons. Sometimes a case raises a complex problem that requires specific expertise, such as computing damages owed to different people in large-scale lawsuits. They may also be appointed to perform tasks that are so time-consuming that a judge or a magistrate judge does not have the bandwidth to handle them.

For example, judges may instate special masters to sift through seized records when the F.B.I. has carried out search warrants targeting lawyers or law firms. In those cases, there is a strong possibility they will seize a significant amount of material that is subject to attorney-client privilege that agents working on an investigation should generally not see.

What is this special master for?

Judge Cannon said the special master’s role would be “to review the seized property, manage assertions of privilege and make recommendations thereon, and evaluate claims for return of property.”

The Mar-a-Lago case does not target a lawyer or a law firm, and the magistrate judge who approved the warrant allowed the F.B.I. to instead use its normal procedure: A so-called filter team, made up of agents who are not involved in an investigation, sets aside any documents it sees as potentially shielded by attorney-client privilege.

But Judge Cannon decided that “the interests and appearance of fairness” justified having a more independent arbiter go through the materials, emphasizing Mr. Trump’s status as a former president.

Her decision to include materials potentially protected by executive privilege — meaning communications between Mr. Trump and his advisers when he was still the president — drew significant controversy.

More on the Trump Documents Inquiry

Who can be a special master?

“It is usually an appointment given to people who have some independent reputation in the bar,” said Sam Issacharoff, a New York University law professor. “Frequently it can be retired judges. It can be people who may have stepped down as partners in big law firms, things of that sort. Sometimes it’s academics when all else fails.”

For example, Barbara S. Jones, a former federal judge, was appointed as a special master to weed out files protected by attorney-client privilege after the F.B.I. conducted searches targeting two of Mr. Trump’s personal lawyers, Michael D. Cohen in April 2018 and Rudolph W. Giuliani in April 2021. She took on the same job in a case involving Project Veritas, which is under scrutiny for its role in obtaining a stolen diary of President Biden’s daughter.

How will classified materials play into this?

That many of the documents the F.B.I. seized were marked as classified significantly narrows the pool of people Judge Cannon might appoint. That in turn could slow the process of identifying an appropriate person, and the process could be slowed further if that person’s ability to receive assistance from aides is limited.

After the search, Mr. Trump claimed that he had declassified everything he happened to take from the Oval Office, a questionable claim for which no credible evidence has emerged and which his lawyers have not repeated in court. They have instead agreed that “it would be appropriate for the special master to possess a top secret” security clearance.

Notably, federal judges are exempt from needing a security clearance to see classified material relevant to their cases, though their clerks and assistants must still receive clearances.

How long will the review take?

That is an open question. Judge Cannon has not yet issued an order specifically laying out the duties and deadlines for the special master.

This particular situation is unusual partly because Mr. Trump’s lawyers did not immediately ask a judge to appoint a special master. Investigators have already reviewed the records taken from Mar-a-Lago, and an F.B.I. filter team has already set aside about 500 pages as potentially covered by attorney-client privilege.

Brandon Fox, a Jenner & Block partner who until last year was the head of the criminal division for the federal prosecutor’s office in Los Angeles, said the F.B.I. has likely already created a log describing each document. He said the judge should use that log as a starting point, letting Mr. Trump’s legal team flag specific files for the special master to review.

“You don’t want the special master looking at every single document,” he said.

But Mr. Fox also predicted that Mr. Trump’s legal team was likely to “argue to the judge that you can’t trust the government in the descriptions of those things and so the special master needs to look at everything.”

“How credible the judge finds that argument to be will determine whether this gets slowed down,” he added.

Judge Cannon has hinted that she was inclined to direct the special master to start from scratch and examine every file. In her ruling, she said a special master was appropriate in part because she did not have time herself to quickly sift through the more than 11,000 government documents and 1,800 other items the F.B.I. seized.

What are the short-term effects of such a review?

It seems very likely to slow down the investigation. In addition to saying she would appoint a special master, Judge Cannon temporarily barred the government from making further use of the seized documents in its investigation.

That order likely shuts down investigators’ ability to continue working. Even if they could avoid using the fact that documents were found at Mar-a-Lago as a premise when questioning witnesses, any new information they gather could give defense lawyers an opening to accuse them of violating the judge’s order and put the investigation under a microscope.

The review could also disrupt the inquiry if the special master eventually recommends to Judge Cannon — and she agrees — that there are documents in the trove that are protected by executive privilege. Judge Cannon could rule that the entire investigative team must be replaced because they were tainted by exposure to the information they should not have seen.

The Justice Department would surely appeal — as it noted in arguing against giving any special master that mandate, no court has ever held that a current or former president may use the privilege to shield evidence from criminal investigators who are part of the executive branch. But the appellate process, even if successful, could mean many months of further delay.

What about the longer-term effects?

There are perhaps not many, some legal scholars say. Ultimately, if the Justice Department decides to bring charges in its investigation into Mr. Trump’s handling of sensitive government documents, it would need only a few of the records as representative evidence. And there is no serious argument that intelligence reports marked as top secret and produced by agencies like the Pentagon or the C.I.A. are privileged.

Appearing on Fox News on Tuesday, former Attorney General William P. Barr — who used his power to shield Mr. Trump while in office — said Judge Cannon’s ruling was wrong and the department should appeal it. But he also predicted it was more likely to cause delay than derailment.

“I don’t think the appointment of a special master is going to hold up, but even if it does I don’t see it fundamentally changing the trajectory,” Mr. Barr said, adding: “Documents were taken, classified information was taken and not handled appropriately, and they are looking into — and there is some evidence to suggest — that they were deceived. And none of that really relates to the content of documents. It relates to the fact that there were documents there.”