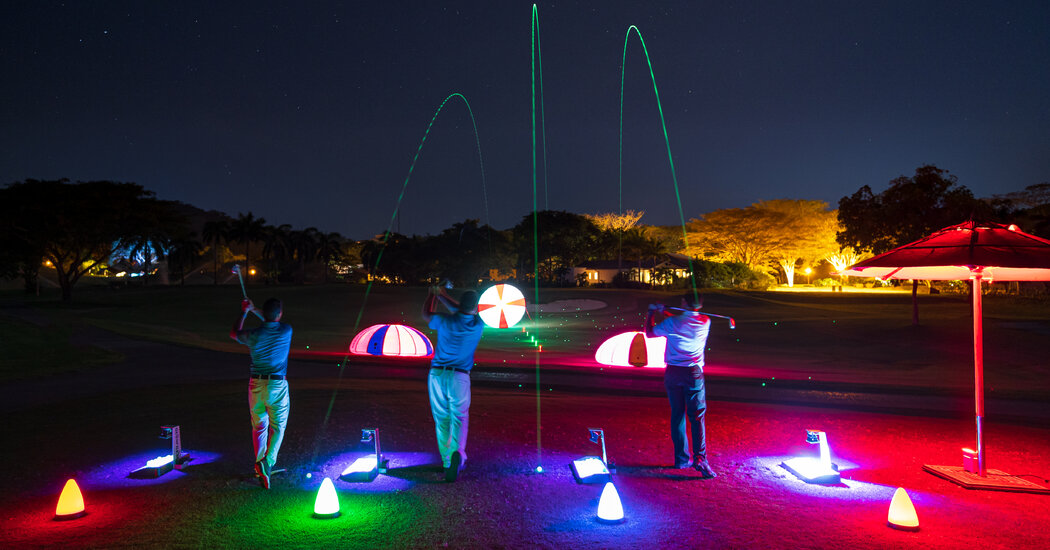 This article is part of our latest special report on International Golf Homes.

The traditional 18-hole round of golf may be for those who play the game, but the recent spins on the sport and ways to enjoy a course are options for anyone who doesn’t.

Recently, residential developments where golfing is usually a highlight amenity are offering alternatives — often on the course itself or at the driving range — such as glow golf and footgolf. Disc golf, a game usually played on a dedicated course, where players aim for a target with a Frisbee-like disc, is another popular option. Some communities are also repurposing their courses in the winter as venues for cross-country skiing, snowshoeing and other winter sports.

These alternative golf course activities are growing at a fast clip in golf communities, according to Jason Becker, the chief executive and founder of Golf Life Navigators, a matchmaking site that helps people find golf memberships and golf homes based on their criteria. “It’s similar to the surge happening with pickleball,” he explained, drawing a parallel to the popular tennis alternative. He noted that the move toward different activities is also “tied to the larger trend of nongolfers moving into these communities who are seeking other ways to have fun and interact with family and friends.”

A recent survey by Golf Life Navigators of 50,000 people who bought homes in golf developments indicated that a club’s activities outside of golf were a primary reason for them to buy in that community. “One of the ways that golf clubs are meeting this demand is by using their courses in creative ways,” Mr. Becker said.

Philip A. White Jr., the president and chief executive of Sotheby’s International Realty and an avid golfer, agreed and said that games such as footgolf and glow golf, along with sports such as snowshoeing, were appealing because they suited all age groups, interests and lifestyles. “You don’t need any technical skills or knowledge to try them the way you do with golf,” he said. “They’re especially a hit with millennials who have started buying properties in golf communities ever since the beginning of the pandemic.”

Besides drawing in a broader pool of residents, Mr. Becker added, activities on a golf course or at a driving range are an opportunity for communities to generate more revenue. The activities “create another stream of money and can help keep a club financially healthy,” he said.

Following is a roundup of some alternative golf course programs.

Traditional golf entails using a club to hit a golf ball into a hole. In this same spirit, footgolf is a game where players kick a soccer ball into a larger hole in as few shots as possible.

Footgolf can be played on a regular golf course — though it’s typically played on a dedicated course — and is one of the fastest-growing sports in golf communities, mainly in the United States, according to Mr. Becker.

Footgolf will take center stage at Evermore Orlando Resort, for instance, an 1,100-acre property with homes for rent that’s debuting next year. Guests will be able to play the game on the Jack Nicklaus-designed golf course at designated times, according to Walter Zak, the resort’s managing director, and players of any age are welcome.

Ka’anapali Beach Resort, a 1,200-acre property in Maui with condominiums and single-family homes, has a dedicated footgolf course. Players are surrounded by tropical flowers such as hibiscus and bougainvilleas and have views of the Pacific Ocean and West Maui Mountains. The course is walkable and open in the afternoons, said Susan Havens, the director of sales and marketing for Ka’anapali Golf Courses. It sees around 20 players a day, and a round costs $15. The game has been so popular with homeowners, she said, that Ka’anapali now hosts an annual footgolf tournament in the summer. “People of all ages, from 5-year-olds to those in their 80s, come out for the tournament and play on a regular basis,” she said. “It’s brought our community together.”

Michelle Libitsky, a homeowner at the resort, is a nongolfer and said that she took up footgolf at the start of the pandemic. She’s since become a self-described “addict” and plays every Friday with her husband, Gabriel, and their group of friends, who they met through playing in the first place. “The regular golf course is beautiful, but I could never take advantage of it since I don’t play,” she said. “Footgolf has opened up a new avenue for me to play a course.”

As the name hints, glow golf is a game on the golf course that’s played after hours. Instead of aiming golf balls into a hole, however, players target large, inflatable glow-in-the-dark targets. The balls light up, too.

Reserva Conchal, a 2,300-acre resort with residences and hotels in Guanacaste on Costa Rica’s west coast, began offering glow golf just before the pandemic. The aim was to diversify the property’s recreational options, according to the general manager, Andy Stockinger. Currently, Reserva Conchal hosts monthly glow-golf nights at its driving range that kick off in the evening with cocktails and finger foods, such as sliders and pizza bites.

Then it’s on to the golf: Each time a player hits an oversize target, the target lights up and plays music — the repertoire includes everything from the latest Katy Perry song to Queen’s “Another One Bites the Dust.” The event goes until midnight, Mr. Stockinger said, and costs $30 to $50 a person. “People really loosen up and have a good time,” he said. “The program has been so successful that residents are booking glow-golf parties.”

Southworth Development, a golf real estate company with six properties globally, includes glow golf as an amenity in several of its developments. The Abaco Club, in the Bahamas, for example, offers glow golf nights several times a month at its driving range, said James Dunn, the director of member experience. They’re akin to a multisensory show: A DJ plays pop music and takes player requests, and there’s a bar set up with a mocktail and cocktail list. The Cosmic Crush, a mixture of pineapple, orange and lime juices finished with grenadine and (optional) rum, is the house favorite, Mr. Dunn said. It’s not a night that’s lacking in entertainment, but a fire juggler adds even more flavor.

John May, a San Diego resident who owns a property at Kukui’ula, a community in Kauai, Hawaii that offers the sport, is a glow golf regular and said that playing makes him feel like he’s at a party with his friends. “I have a drink in one hand, a putter in another and a glow stick as a headband,” he said. “What’s not to like?”

Golf communities in destinations that have snow during the winter are transforming their courses and driving ranges into wonderlands for seasonal activities: snowshoeing, snow biking, cross-country skiing and even snowmobiling.

Case in point: Tributary, a 1,500-acre residential resort in Driggs, Idaho, started grooming its 18-hole course last winter for cross-country skiing and snowshoeing. Residents can trek through the snow along more than seven miles of trails and are treated to views of the Teton mountains along the way, said Ulla Rasche, the resort’s general manager. Tributary also has plenty of space for disc golfing and fat biking, in which cyclists ride bikes with wide, oversize tires that are designed to handle snow and uneven terrain. These winter sports are free for residents, who can also borrow equipment from the property to enjoy them, such as snowshoes and skis.

Then there’s Tributary’s driving range that offers snowmobiling for children between the ages of 7 and 16. The resort has three sizes of snowmobiles and the cost to use them is $45 per child, Ms. Rasche said. “We want to be a year-round lifestyle club that’s inclusive to everyone, and these winter activities are a way for us to do that,” she said.

Other locations where the golf course doubles as a cross-country ski and snowshoe destination include Suncadia Resort, in Cle Elum, Wash., about 80 miles from Seattle, and Grand View Lodge, in Nisswa, Minn., where the course’s ski trails stretch for more than five miles.

At Snake River Sporting Club, in Jackson, Wyo., the woodland-surrounded course becomes a snow-blanketed park for activities such as tubing and sledding, along with cross-country skiing — both classic and skate-style. Chuck Greenwald, the property’s director of hospitality, said that part of the course bordered the Snake River and that residents might spot bald eagles, moose and elk as they worked their way through the interconnected paths.

At the midway point, the resort has turned a 19th-century cabin into a warming hut that has a wood-burning stove, where skiers, snow tubers and sledders can stop in for a hot toddy or glass of wine and get a respite from the cold. “It’s become a popular socializing spot for homeowners,” Mr. Greenwald said. “Some even hit the course just to pay a visit here.”