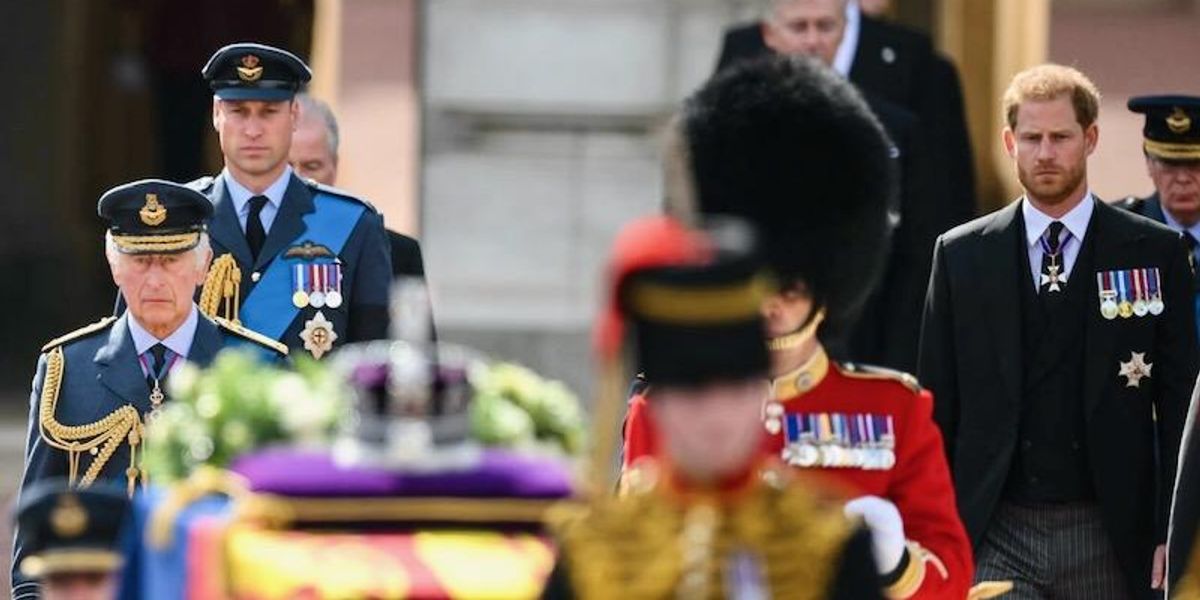 Twenty-five years after capturing the hearts of the world when they walked behind their mother Diana’s coffin, princes William and Harry on Wednesday again helped lead the most poignant of processions.

This time, the estranged brothers were reunited in grief with the royal family as they honored their grandmother Queen Elizabeth II, on a final pageant-filled journey from Buckingham Palace.

Under the mournful funeral marches of Chopin, Beethoven and Mendelssohn — played by the bands of the Scots Guards and the Grenadier Guards — her coffin was taken in full pomp to lie in state at Westminster Hall until Monday.

Thousands lined the mile-long (1.6 kilometer) route through London, looking on in respectful silence — and sometimes applause — as Britain summoned all its ceremonial majesty for the sombre occasion.

“It’s like completing a journey, from watching the coronation of the queen in 1953 to paying tribute to her today,” Ian Gammie, 79, told AFP.

The late queen’s custom-made lead-lined English oak casket, adorned with the Royal Standard flag, the Imperial State Crown on a velvet cushion and a wreath of flowers, began the 38-minute journey at 2:22 pm (13:22 GMT).

The floral arrangement atop the coffin featured white roses and dahlias as well as pittosporum, lavender and rosemary from her gardens at Windsor Castle, and pine from the Balmoral estate in Scotland where she died peacefully last Thursday.

Mounted on a gun carriage of the ceremonial King’s Troop Royal Horse Artillery unit, the coffin emerged through Buckingham Palace’s Grand Entrance to the sound of ceremonial guns in nearby Hyde Park.

They then fired every minute during the procession, while in the distance Big Ben tolled at the same intervals.

Three officers and 101 rank-and-file members of the King’s Life Guard, an infantry and cavalry unit charged with guarding royal residences, formed a guard of honor outside.

Others from the unit gave a “royal salute” as the procession began making its way along The Mall, filled with Union Jack flags and packed with onlookers who had queued for hours for their spot.

Behind the coffin the new sovereign, King Charles III, led the royal cortege in the military uniform of a Field Marshal and carried a baton presented to him by his late mother when he acquired the rank in 2012.

He was flanked to his left by his three siblings, with Princess Anne and Prince Edward also decked out in ceremonial uniform.

Former Royal Navy helicopter pilot Prince Andrew — stripped of his “His Royal Highness” title over a sex assault scandal — attended in a morning suit adorned with medals and decorations.

William was dressed in Royal Air Force uniform and Harry in a morning suit with military medals but no ceremonial garb, despite his tours of duty in Afghanistan with the British Army.

He stepped down as a working royal in 2020 and now lives in the United States. Next to William and Harry was their cousin, Anne’s son Peter Phillips.

Led in the front by mounted London police officers and a dismounted detachment of Household Cavalry, the coffin was escorted by the Grenadier Guards — an infantry regiment dating back to 1656 — clad in their distinctive bearskin hats and red tunics.

Crowds of mourners lined every section of the route, with police closing access to viewing points around an hour before when capacity was reached.

As the cortege proceeded slowly through several key arteries in Westminster and neared parliament, it passed by the statue of Winston Churchill, the first of the queen’s 15 prime ministers during her seven-decade reign.

It was greeted with applause from onlookers packed into Parliament Square and another guard of honodr by representatives from all three branches of the military, as well as a band of the Royal Marines with their drums draped and muffled.

Senior women in the royal family, including Charles’s wife Queen Consort Camilla, William’s wife Catherine and Harry’s wife Meghan, were driven by car to parliament in time for the coffin’s arrival at 3:00 pm exactly.

Prime Minister Liz Truss was among the dignitaries there to mark the arrival of the coffin, which will lie in state in the cavernous hall until Monday morning.