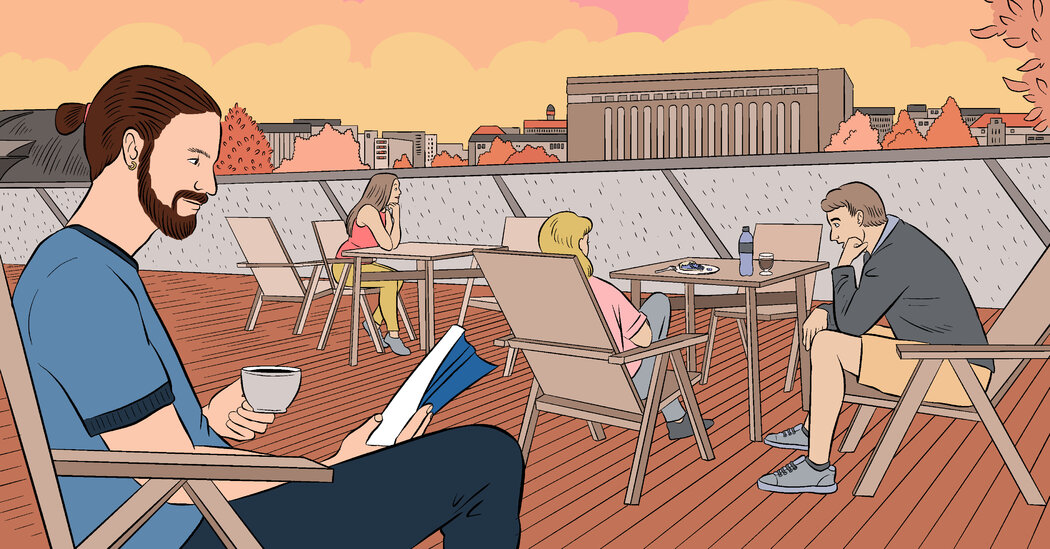 Finns love to read: It’s their favorite thing to do in their time off. The country is a little smaller than Montana, but its library network is extensive, with hundreds of central libraries, branch libraries and mobile libraries.

I was two years old when my family, forced to flee the Yugoslav Wars, found refuge in Finland. We settled in Porvoo, a small city of around 50,000 people about an hour away from the capital, Helsinki. Picturesque and popular with tourists, Porvoo is a medieval town known for its old buildings, wooden houses and 15th-century cathedral.

One thing it didn’t have were books in my family’s language — my first language, Albanian. I can’t say that I was ever encouraged to pick up a book. We didn’t do that in my family. But once I learned how to read Finnish, I never stopped, becoming both an oddball in our household and a frequent sight at the small school library.

I was 10 years old when the new building of the main library of Porvoo opened its doors to the public. When I visited for the first time, I was so in awe that I cried. It was the most beautiful thing I had ever seen: endless shelves carrying tens of thousands of books, records, movies, magazines and newspapers. And the best part was that everything was free. I couldn’t understand how that was possible. All these books, these worlds, this information — free of charge? Really?

I rarely, however, borrowed a book, and if I did, I kept it hidden. To this day, I don’t know why that was, exactly — why it felt wrong and scary somehow to bring books home with me. Maybe I wanted to keep books to myself, a secret of some kind. Or perhaps I was just scared that something would happen to the books if they were somewhere they didn’t seem to belong. But unlike the real world, books never distressed me — even crime, horror and thriller titles — and I read everything. I would pick up a book from the shelf, sit down at a table, read, then return the book to its place and continue the next day from where I’d left off.

The war in Kosovo in the 1990s made our family home rather anxious, so I spent as much time as I could away from it, in the new library — falling in love with books and stories and the Finnish language; gaining confidence as a speaker and as a child of immigrant parents; and dreaming of writing a book of my own one day, slowly growing from a reader to a writer.

What’s a good place to curl up with a book on a day off?

If, or when, you visit Helsinki, one of the first things you should do is dedicate a day to visiting two gorgeous libraries.

The first is Oodi, Helsinki’s new central library — a sweepingly beautiful building that combines spruce timber and glass, inspired by Finland’s exquisite nature. It opened in late 2018, and in 2019 the International Federation of Library Associations named it the best Public Library of the Year. From the third floor, reserved entirely for books, you can enjoy breathtaking views from a large terrace. Alternatively, you can attend events, see a movie or have coffee or lunch on the ground floor. Oh yes, and on the second floor you can book a work space, play video games with your friends and use a sewing machine, or even a 3-D printer. All free of charge.

The second spot is the National Library of Finland, the oldest in the country, designed by the famous German architect Carl Ludvig Engel. The temple-like building itself is spectacular, embracing different classical styles, and its massive collection includes the entire printed national heritage of Finland.

What should I read before I pack my bags?

To understand the country’s history better, I would recommend a classic: “Unknown Soldiers,” by Väinö Linna. Originally published in 1954, it follows the events of the Second Soviet-Finnish War during World War II, from the perspective of men on the front. Finland fought alongside Germany against the Soviet Union, a fact often left out of history books.

Lately, however, there’s been a surge of novels that offer insight into the relations between Finland and Germany during the war, such as “The Colonel’s Wife,” by Rosa Liksom.

Tell me what audiobook would make for good company while I walk around.

“The Women I Think About at Night,” by Mia Kankimäki. A middle-aged woman who works at a Finnish publishing company decides to quit her job, leave everything behind and follow the tracks of women around the world who have been meaningful to her. I recommend listening to this book, even though it is mostly set outside Finland, as there’s something very honest and direct in Kankimäki’s way of looking at the world — and Finns are known for their honesty and directness!

What writer is everyone in town talking about?

I’d say Antti Tuomainen. His books are hilarious, and he just keeps getting funnier. They’re doing a Hollywood film of one of his recent novels, “The Rabbit Factor,” in which a rather neurotic insurance mathematician inherits an adventure park. Things quickly take a turn for the worse — and for the absurd — as the protagonist is faced with issues and events that can’t be calculated, unlike everything else in his life.

What should I read once I get there?

“Purge,” by Sofi Oksanen, is one of my favorite books of all time — a heartbreaking exploration of betrayal and life in Estonia under Soviet rule.

“The Summer Book,” by Tove Jansson, is another favorite. A grandmother and her granddaughter spend a summer together on an island, mostly talking about life. This book is a true gem: a gentle giant and a quiet, powerful, enchanting read that makes you want to stare at an empty wall for a while after finishing.

“Troll: A Love Story,” by Johanna Sinisalo, is a celebration of the imagination — a quirky and peculiar read for those who love something out of the ordinary. The protagonist, a young photographer in his 30s, finds a wounded troll (from the Scandinavian mythology) outside his apartment building, and decides to give it shelter.

Pajtim Statovci, a Finnish author born in Kosovo to Albanian parents, has published three novels: “My Cat Yugoslavia”; “Crossing,” which was a National Book Award finalist; and “Bolla,” which won Finland’s highest literary honor, the Finlandia Prize, and was a finalist for the 2021 Kirkus Prize for Fiction.