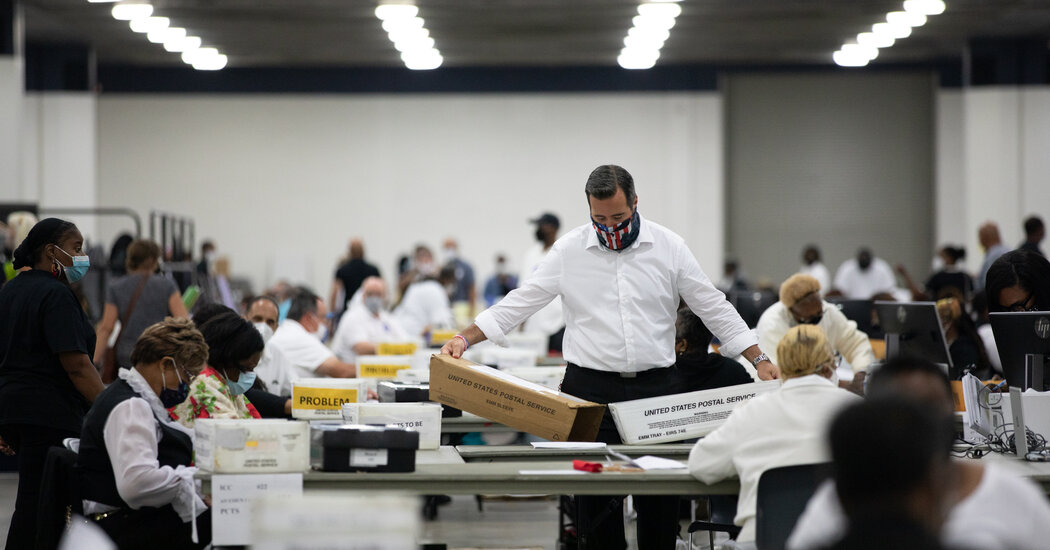 WASHINGTON — Nearly two years after President Donald J. Trump refused to accept his defeat in the 2020 election, some of his most loyal Republican acolytes might follow in his footsteps.

When asked, six Trump-backed Republican nominees for governor and the Senate in midterm battlegrounds would not commit to accepting this year’s election results, and another five Republicans ignored or declined to answer a question about embracing the November outcome. All of them, along with many other G.O.P. candidates, have pre-emptively cast doubt on how their states count votes.

The New York Times contacted Republican and Democratic candidates or their aides in 20 key contests for governor and the Senate. All of the Democrats said, or have said publicly, that they would respect the November results — including Stacey Abrams of Georgia, who refused to concede her 2018 defeat to Brian Kemp in the state’s race for governor. Mr. Kemp, now running against her for another term, “will of course accept the outcome of the 2022 election,” said his press secretary, Tate Mitchell.

But several Republicans endorsed by Mr. Trump are hesitant to say that they will not fight the results.

Among the party’s Senate candidates, Ted Budd in North Carolina, Blake Masters in Arizona, Kelly Tshibaka in Alaska and J.D. Vance in Ohio all declined to commit to accepting the 2022 results. So did Tudor Dixon, the Republican nominee for governor of Michigan, and Geoff Diehl, who won the G.O.P. primary for governor of Massachusetts this month.

The candidates and their aides offered an array of explanations. Some blamed Democratic state election officials or made unsubstantiated claims that their opponents would cheat. In Alaska, a spokesman for Ms. Tshibaka pointed to a new ranked-choice voting system that has been criticized by Republicans and already helped deliver victory to a Democrat in a House special election this year.

An aide to Ms. Dixon, Sara Broadwater, said “there’s no reason to believe” that Michigan election officials, including Jocelyn Benson, the Democratic secretary of state, “are very serious about secure elections.”

To some degree, the stances by these Republican candidates — which echo Mr. Trump’s comments before the 2016 and 2020 presidential elections — may amount to political posturing, in an effort to appeal to G.O.P. voters who do not believe the former president lost in 2020. An aide to one Republican nominee insisted that the candidate would accept this year’s results, but the aide declined to be publicly identified saying so.

And unlike Mr. Trump two years ago, the candidates who suggest they might dispute the November results do not hold executive office, and lack control of the levers of government power. If any were to reject a fair defeat, they would be far less likely to ignite the kind of democratic crisis that Mr. Trump set off after his 2020 loss.

The State of the 2022 Midterm Elections

With the primaries over, both parties are shifting their focus to the general election on Nov. 8.

But they do have loud megaphones in a highly polarized media environment, and any unwarranted challenges from the candidates and their allies could fuel anger, confusion and misinformation.

“The danger of a Trumpist coup is far from over,” said Rosa Brooks, a law professor at Georgetown University who in early 2020 convened a group to brainstorm ways Mr. Trump could disrupt that year’s election. “As long as we have a significant number of Americans who don’t accept principles of democracy and the rule of law, our democracy remains in jeopardy.”

The positions of these Republican candidates also reflect how, over the last two years, some of those aligned with Mr. Trump increasingly reject the idea that it is possible for their side to lose a legitimate election.

Still, many Republican candidates, including several who have cast doubt on the 2020 outcome, said they would recognize this year’s results. Darren Bailey, the Republican nominee for governor of Illinois — who said in a June interview that he did not know if the 2020 election had been decided fairly — responded that “yes,” he would accept the 2022 result.

In Nevada, the campaign of Adam Laxalt, the Republican nominee for Senate, said he would not challenge the final results — even though Mr. Laxalt, a former state attorney general, helped lead the effort to overturn Mr. Trump’s 2020 defeat in the state, spoke last year about plans to file lawsuits to contest the 2022 election and called voter fraud the “biggest issue” in his campaign.

And Dr. Mehmet Oz in Pennsylvania, who said during his successful Republican primary campaign for Senate that “we cannot move on” from the 2020 election, promised to uphold voters’ will.

“Yes, Dr. Oz will accept the result of the PA Senate race in November,” Rachel Tripp, an Oz spokeswoman, wrote in a text message.

Three other Republican Senate candidates — Herschel Walker in Georgia, Joe O’Dea in Colorado and Senator Lisa Murkowski in Alaska — committed to embracing their state’s election results. So did several Republicans running for governor, including Mr. Kemp, Joe Lombardo in Nevada and Christine Drazan of Oregon.

Aides to several Republican nominees for governor who have questioned the 2020 election’s legitimacy did not respond to repeated requests for comment on their own races in November. Those candidates included Doug Mastriano of Pennsylvania, Kari Lake of Arizona, Tim Michels of Wisconsin and Dan Cox of Maryland.

Ms. Lake was asked in a radio interview this month whether she would concede a defeat to Katie Hobbs, her Democratic rival and Arizona’s secretary of state. “I’m not losing to Katie Hobbs,” Ms. Lake replied.

Ms. Hobbs’s spokeswoman, Sarah Robinson, said her candidate “will accept the results of the election in November.”

Aides to Senator Ron Johnson of Wisconsin and Don Bolduc, the Republican Senate nominee in New Hampshire, declined to answer questions about acknowledging the results. Mr. Johnson has been a prolific spreader of misinformation about the 2020 election and the Capitol riot. Mr. Bolduc claimed that the 2020 contest was stolen from Mr. Trump until Thursday, when he announced two days after winning his primary that President Biden had won legitimately.

During a Republican primary debate in Michigan in June, Ms. Dixon would not commit to honoring the results of the primary — which she went on to win — or the general election, pre-emptively accusing Ms. Benson, the secretary of state, of election fraud.

“If we see the secretary of state running a fair election the way she should be, then that’s a different story,” Ms. Dixon said. “We have to see what she’s going to do to make sure it’s going to be a fair election.”

In a statement, a representative for Ms. Benson said she and her staff “work tirelessly to ensure the state’s elections are secure and accurate, and expect every candidate and election official to respect the will of the people.”

In Arizona — where Republicans spent months on a government-funded review of 2020 ballots that failed to show any evidence of fraud — Mr. Masters, the Trump-backed Republican nominee for Senate, baselessly predicted to supporters in July that even if he defeated Senator Mark Kelly, the incumbent Democrat, enough votes would somehow be produced to flip the result.

A Masters aide, Katie Miller, sent The Times an August article in The Arizona Republic in which Mr. Masters said there was “evidence of incompetence” but not of fraud in the state’s primary election. Ms. Miller declined to say if Mr. Masters would respect the November results.

An aide to Mr. Vance, Taylor Van Kirk, cited the candidate’s primary-season endorsement from Ohio’s Republican secretary of state, Frank LaRose. At the time, Mr. Vance predicted “a successfully run primary election.” But Ms. Van Kirk would not say if Mr. Vance would recognize the November outcome. Mr. Vance did not respond to messages.

In Alaska, Republican hesitancy to accept election results centers on the new ranked-choice voting system. After losing an August special election for the House, Sarah Palin warned baselessly that the method was “very, very potentially fraught with fraud.”

Tim Murtaugh, a spokesman for Ms. Tshibaka, who is challenging Ms. Murkowski, a fellow Republican, said his candidate would not commit to honoring the race’s outcome. Mr. Murtaugh said — not without merit — that the new voting system “was installed to protect Lisa Murkowski.”

Jonathan Felts, a spokesman for Representative Ted Budd of North Carolina, the state’s Republican nominee for Senate — who in Congress voted against certifying the 2020 election — declined to say if Mr. Budd would uphold the state’s results and claimed without evidence that Cheri Beasley, the Democratic nominee and a former State Supreme Court justice, might try to disenfranchise voters.

Ms. Beasley said, “I trust that our 2022 election will be administered fairly.”

Officials on other Republican campaigns expressed worries that if voters heard too much skepticism about the validity of this year’s elections, it could lead to a replay of the Georgia Senate races in January 2021, when Democrats eked out two narrow victories after Mr. Trump spent weeks railing falsely about election fraud.

“The most important thing is to not get depressed about the elections and say, ‘Oh, it’s going to be stolen, so what’s the point of doing this?’” Mr. Diehl, the Republican nominee for governor of Massachusetts, said in a recent radio interview.

Mr. Diehl’s spokeswoman, Peggy Rose, replied “no comment” when asked if he would agree to the outcome of the November election.

His Democratic opponent, Maura Healey, the state’s attorney general, said, “We will always accept the will of the people.”