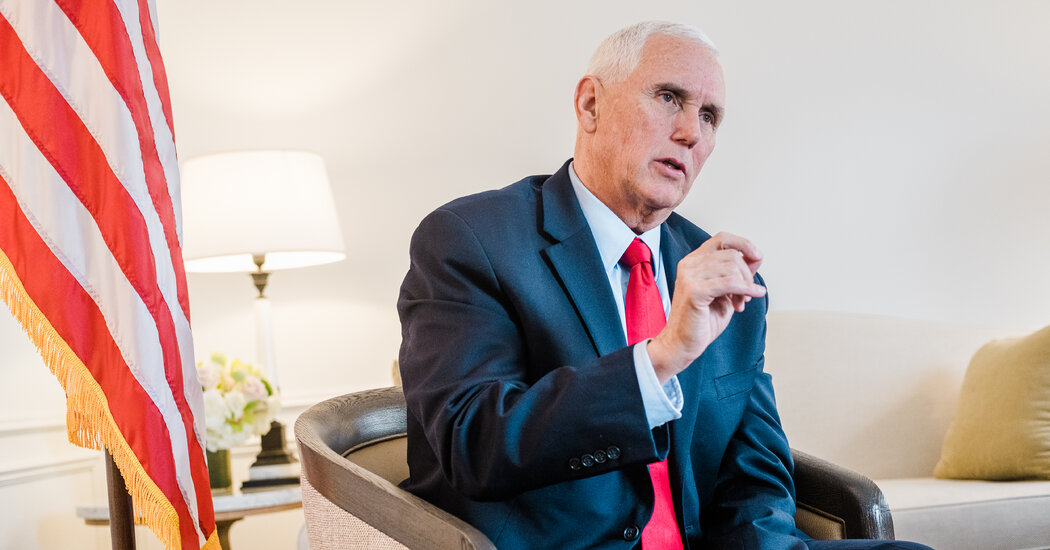 The Justice Department is seeking to question former Vice President Mike Pence as a witness in connection with its criminal investigation into former President Donald J. Trump’s efforts to stay in power after he lost the 2020 election, according to two people familiar with the matter.

Mr. Pence, according to people familiar with his thinking, is open to considering the request, recognizing that the Justice Department’s criminal investigation is different from the inquiry by the House Jan. 6 committee, whose overtures he has flatly rejected.

Complicating the situation is whether Mr. Trump would try to invoke executive privilege to stop him or limit his testimony, a step that he has taken with limited success so far with other former officials.

Mr. Pence was present for some of the critical moments in which Mr. Trump and his allies schemed to keep him in office and block the congressional certification of Joseph R. Biden Jr.’s victory. An agreement for him to cooperate would be the latest remarkable twist in an investigation that is already fraught with legal and political consequences, involving a former president who is now a declared candidate to return to the White House — and whose potential rivals for the 2024 Republican nomination include Mr. Pence.

Thomas Windom, one of the lead investigators examining the efforts to overturn the election, reached out to Mr. Pence’s team in the weeks before Attorney General Merrick B. Garland appointed a special counsel on Friday to oversee the Jan. 6 investigation and a separate inquiry into Mr. Trump’s handling of classified documents, according to one of the people familiar with the matter. Mr. Garland has said that the appointment of the special counsel, Jack Smith, will not slow the investigation.

The discussions about questioning Mr. Pence are said to be in their early stages. Mr. Pence has not been subpoenaed, and the process could take months, because Mr. Trump can seek to block, or slow, his testimony by trying to invoke executive privilege.

Mr. Trump has cited executive privilege to try to stop other former top officials from talking with investigators. While those efforts have generally been unsuccessful in stopping testimony by the officials to a federal grand jury, they have significantly slowed the process.

Mr. Trump’s efforts to slow or block testimony included asserting executive privilege over testimony from two of Mr. Pence’s top aides: his former chief of staff, Marc Short, and his general counsel, Greg Jacob. But both men returned for grand jury interviews after the Justice Department, in a closed-door court proceeding, fought the effort to apply executive privilege.

Mr. Pence, who rebuffed Mr. Trump’s efforts to enlist him in the plan to block certification of the Electoral College results, has been publicly critical of Mr. Trump’s conduct in the run-up to the Jan. 6 assault on the Capitol and on the day of the attack, when members of a pro-Trump mob were chanting “Hang Mike Pence.”

Understand the Events on Jan. 6

During an appearance in New Hampshire in August, Mr. Pence indicated he was open to appearing before the House Jan. 6 committee, which had been pushing to have him tell his story, but he offered a caveat.

“If there was an invitation to participate, I’d consider it,” Mr. Pence said at the time. But he added that he was concerned that speaking to a congressional committee would violate the doctrine of separation of powers between the executive and legislative branches. “But as I said, I don’t want to prejudge. If ever any formal invitation” came, he said, “we’d give it due consideration.”

However, in interviews for the release of his new book, “So Help Me God,” Mr. Pence has been more emphatic in his opposition to providing testimony to the House committee, asserting that “Congress has no right to my testimony” about what he witnessed.

“There’s profound separation-of-powers issues,” Mr. Pence told The New York Times in an interview. “And it would be a terrible precedent.”

But Mr. Pence, according to people familiar with his thinking, sees the Justice Department inquiry differently given that it is a criminal investigation. His testimony could be compelled by subpoena, though none has been issued.

The former vice president is being represented by Emmet Flood, a veteran Washington-based lawyer who served as the lead Trump White House lawyer dealing with the investigation by Robert S. Mueller III, the special counsel, into possible conspiracy between the Trump campaign and Russia in 2016.

Mr. Flood is representing several other top White House officials who find themselves as witnesses in the range of congressional and Justice Department investigations into Mr. Trump, including Mr. Short.

An increasing number of high-ranking officials in Mr. Trump’s administration have received grand jury subpoenas as part of the Justice Department’s inquiry into a wide array of efforts to overturn the election, including a plan to create fake slates of pro-Trump electors in key swing states that were won by Mr. Biden.

The wide-ranging subpoenas sought information on a host of subjects that included the fake elector plan, attempts to paint the election as having been marred by fraud and the inner workings of Mr. Trump’s main postelection fund-raising vehicle, the Save America PAC.

The effort to seek an interview with Mr. Pence puts both the department and the former vice president in uncharted territory.

Mr. Pence is considering a campaign for president in 2024, in a race that Mr. Trump has already announced his candidacy for. And Mr. Biden’s Justice Department is seeking to use Mr. Pence as a potential witness against Mr. Trump; either could end up as rivals to Mr. Biden should he run again, which he has indicated is likely.

Mr. Pence has written in detail in his book about Mr. Trump’s efforts to stay in power and the pressure campaign he imposed on his vice president beginning in December 2020.

Among other interactions he describes, Mr. Pence details how Mr. Trump summoned him to the Oval Office on Jan. 4 to meet with a conservative lawyer named John Eastman, who repeatedly argued that Mr. Pence could exceed the ceremonial duties of overseeing the Electoral College certification by Congress. Mr. Eastman was promoting the notion that Mr. Pence had the power to set aside the results from states where Mr. Trump was still trying to challenge the outcome.

“In the weeks before Jan. 6, I repeatedly told the president that I did not have the authority to reject or return electoral votes,” Mr. Pence said in the interview. “It was clear he was getting different legal advice from an outside group of lawyers that, frankly, should have never been let in the building.”

In that period of time, Mr. Trump began to publicly pressure Mr. Pence, as well as officials in Georgia, to go along with his efforts to remain in office. At the same time, Mr. Trump began using his Twitter account to try to draw a crowd to Washington for a “protest” at the Ellipse near the White House on Jan. 6, the day of the congressional certification.

The Times has previously reported that Mr. Pence’s chief of staff, Mr. Short, called Mr. Pence’s lead Secret Service agent, Tim Giebels, to his West Wing office on Jan. 5, 2021. When Mr. Giebels arrived at Mr. Short’s office, the chief of staff said that the president was going to turn on the vice president, and that they would have a security risk because of it, a conversation that Mr. Short described to the House select committee. The committee released a video snippet of Mr. Short discussing it at one of its public hearings this year.

Mr. Trump addressed the crowd at the Ellipse at midday on Jan. 6 and again pressured Mr. Pence, whom he had called a few hours earlier in a further effort to persuade him to go along with the last-ditch plan to block the certification.

In his address at the Ellipse, Mr. Trump said: “You’re never going to take back our country with weakness. You have to show strength and you have to be strong.”

He went on: “So I hope Mike has the courage to do what he has to do. And I hope he doesn’t listen to the RINOs and the stupid people that he’s listening to.”

A short time later, Mr. Trump’s supporters marched to the Capitol, where Mr. Pence was. Hundreds of them stormed the building, smashing windows and barreling through doors, forcing Mr. Pence, his wife and his daughter to flee his office in the Capitol and take refuge on a loading dock underground. He stayed there, working to get the situation under control as Mr. Trump watched the coverage of the riot on television at the White House.

Mr. Pence wrote about the experience in his book, and has since described his anger that Mr. Trump was “reckless” and “endangered” Mr. Pence and his family.

Despite Mr. Pence being a witness to a range of Mr. Trump’s actions in office, an interview of the former vice president would be the first time that he has been questioned in a federal investigation of Mr. Trump.

Mr. Pence was in the room for many of the key events examined by Mr. Mueller in the obstruction investigation, but Mr. Pence’s lawyer at the time managed to get him out of having to testify.

The lawyer, Richard Cullen, met with Mr. Mueller and his team, telling them that Mr. Pence believed Mr. Trump had not obstructed justice and what he would say if questioned.

Mr. Mueller’s team never followed up to question Mr. Pence, and he was never cited as a witness against Mr. Trump in Mr. Mueller’s final report.